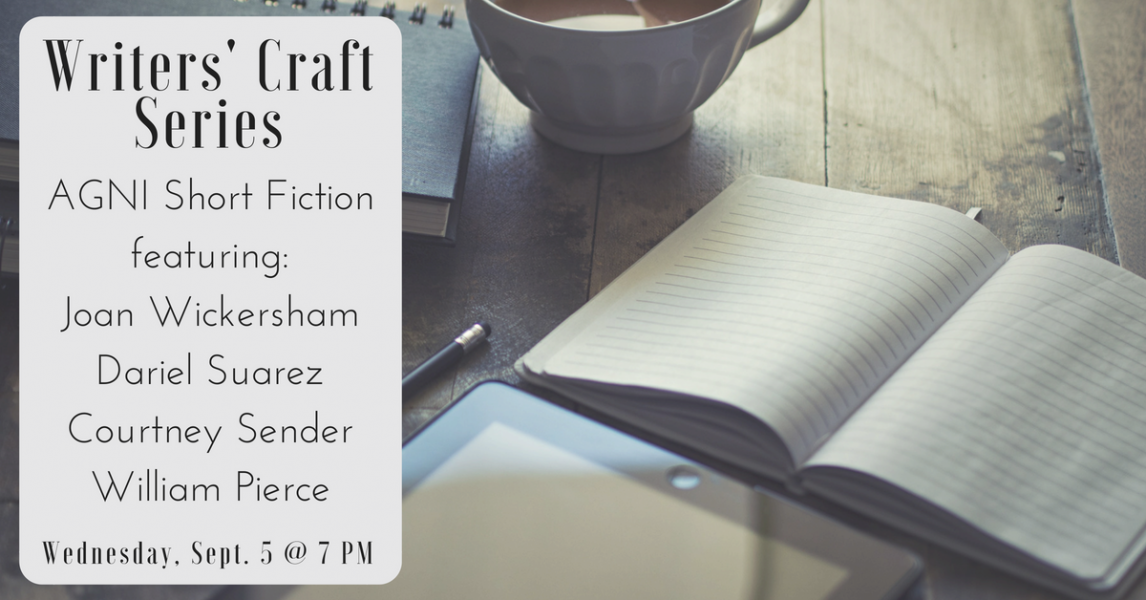 Join us for an evening with three short fiction writers who have been published in AGNI, moderated by AGNI's senior editor William Pierce. Featuring Courtney Sender, Dariel Suarez, and Joan Wickersham.

Courtney Sender’s stories have won the Glimmer Train fiction open, the Boulevard emerging writers contest, The Mississippi Review fiction contest, and the Tennessee Williams/New Orleans Literary Festival fiction contest. Her stories also appear or are forthcoming in AGNI, The Kenyon Review, American Short Fiction, The Georgia Review, and elsewhere. A fellow of Yaddo and the MacDowell Colony, she holds an MFA from the Johns Hopkins Writing Seminars and an MTS in Religion & Literature from Harvard Divinity School.

Dariel Suarez is a Cuban-born writer and one of City of Boston’s inaugural Artist Fellows. His story collection, A Kind Of Solitude, was selected as the winner of the 2017 Spokane Short Fiction Prize and is forthcoming from Willow Springs Books in fall 2018. Dariel’s work has appeared or is forthcoming in The Kenyon Review, Prairie Schooner, Michigan Quarterly Review, The Massachusetts Review, Third Coast, and elsewhere. He’s the Director of Core Programs and Faculty at GrubStreet and currently resides in the Boston area with his wife and daughter.

Joan Wickersham’s most recent book of fiction is The News from Spain. Her memoir The Suicide Index was a National Book Award finalist. She is also the author of a novel, The Paper Anniversary. Her fiction has appeared in The Best American Short Stories and The Best American Nonrequired Reading, and her op-ed column runs regularly in The Boston Globe. She has taught at Harvard, Emerson, the University of Massachusetts Boston, and the Bennington Writing Seminars. She lives in Cambridge with her husband and two sons.

William Pierce’s fiction has appeared in Granta, Ecotone, and elsewhere. He is senior editor of AGNI and the author of Reality Hunger: On Karl Ove Knausgaard’s My Struggle (Arrowsmith Press).

A San Francisco Chronicle and NPR Best Book of the Year

This feature require that you enable JavaScript in your browser.
END_OF_DOCUMENT_TOKEN_TO_BE_REPLACED

This feature require that you enable JavaScript in your browser.
END_OF_DOCUMENT_TOKEN_TO_BE_REPLACED

This feature require that you enable JavaScript in your browser.
END_OF_DOCUMENT_TOKEN_TO_BE_REPLACED