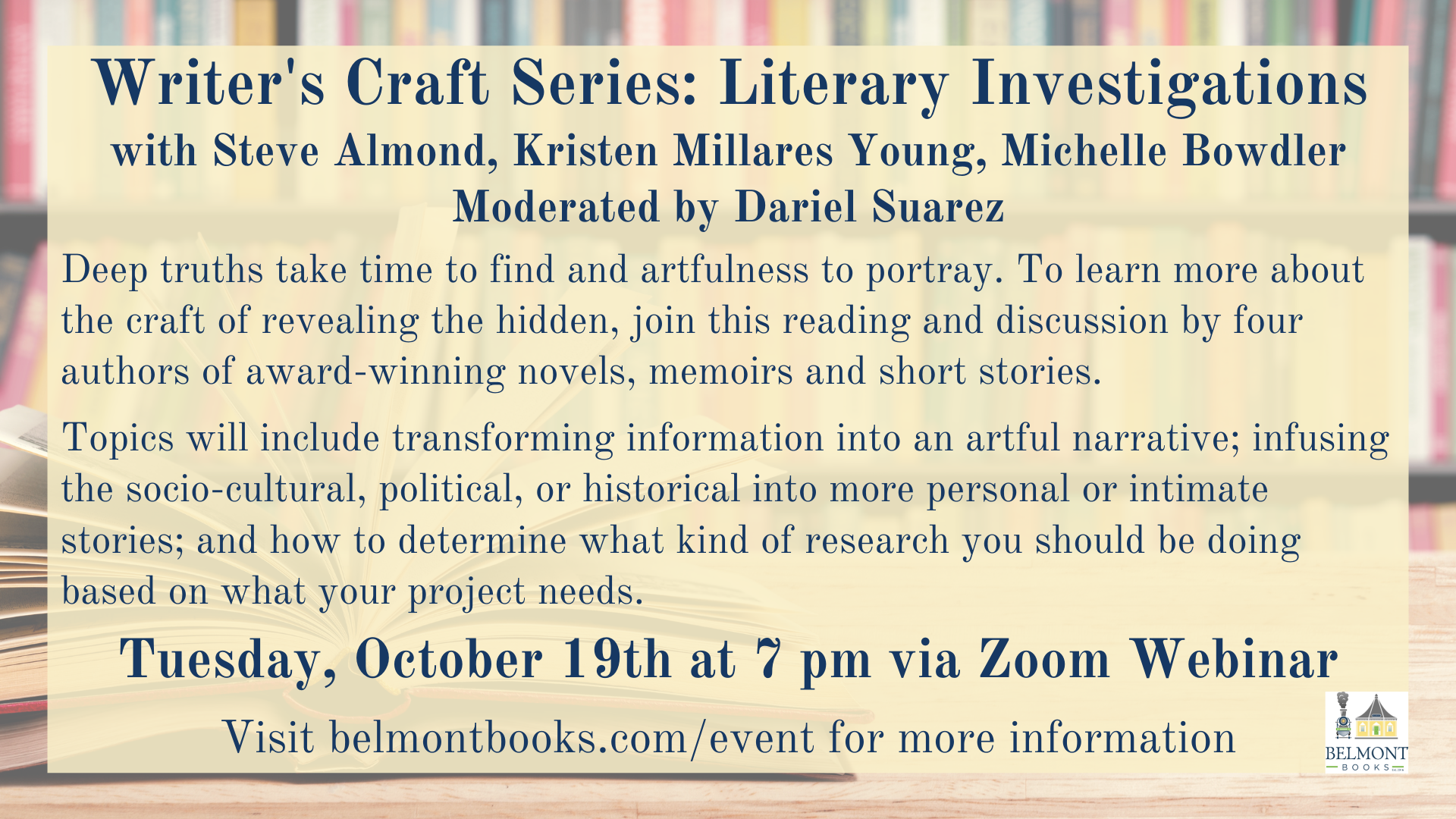 Writers' Craft is back! You won't want to miss this one, with panelists Steve Almond (William Stoner and the Battle for the Inner Life), Kristen Millares Young (Subduction), and Michelle Bowdler (Is Rape a Crime? A Memoir, an Investigation, and a Manifesto), moderated by GrubStreet Education Director Dariel Suarez (The Playwright's House). Register for this Zoom webinar here.

About William Stoner and the Battle for the Inner Life:

Stoner is a 1965 novel by the American writer John Williams. It tells the story of William Stoner, who attends the state university to study agronomy, but instead falls in love with English literature and becomes an academic. The novel narrates the many disappointments and struggles in Stoner's academic and personal life, including his estrangement from his wife and daughter, set against the backdrop of the first half of the twentieth century.

In his entry in the Bookmarked series, author Steve Almond writes about why Stoner has endured, and the manner in which it speaks to the impoverishment of the inner life in America. Almond will also use the book as a launching pad for an investigation of America's soul, in the process, writing about his own struggles as a student of writing, as a father and husband, and as a man grappling with his own mortality.

Steve Almond is the author of ten books of fiction and non-fiction, including the New York Times bestsellers Against Football and Candyfreak. His short stories have appeared in The Best American Short Stories, the Best American Mysteries, and the Pushcart Prize anthologies. His essays and reviews have appeared in The New York Times Magazine, the Wall Street Journal, the Washington Post, and elsewhere. He lives outside Boston with his wife and three children.

Fleeing the shattered remains of her marriage and treachery by her sister, a Latina anthropologist named Claudia takes refuge in Neah Bay, a Native whaling village on the jagged Pacific coast. Claudia yearns to lose herself to the songs of the tribe and the secrets of a spirited hoarder named Maggie. Instead, she stumbles into Maggie's prodigal son Peter, who, spurred by his mother's failing memory, has returned seeking answers to his father's murder. Claudia helps Peter's family convey a legacy delayed for decades by that death, but her presence, echoing centuries of fraught contact with indigenous peoples, brings lasting change and real damage. Through the ardent collision of Peter and Claudia, Subduction portrays not only their strange allegiance after grievous losses but also their shared hope of finding solace and community on the Makah Indian Reservation. An intimate tale of stunning betrayals,

Kristen Millares Young is the author of the novel Subduction, a Paris Review staff pick, which won Nautilus and IPPY awards. Her essays, reviews and investigations appear most recently in the Washington Post. She is the editor of Seismic, a Washington State Book Award finalist. A former Hugo House Prose Writer-in-Residence, Kristen was the researcher for the New York Times team that produced “Snow Fall,” which won a Pulitzer Prize.

About Is Rape a Crime?:

She Said meets Lucky in Michelle Bowdler's provocative debut, telling the story of her rape and recovery while interrogating why one of society's most serious crimes goes largely uninvestigated.

The crime of rape sizzles like a lightning strike. It pounces, flattens, destroys. A person stands whole, and in a moment of unexpected violence, that life, that body is gone.

Award-winning writer and public health executive Michelle Bowdler's memoir indicts how sexual violence has been addressed for decades in our society, asking whether rape is a crime given that it is the least reported major felony, least successfully prosecuted, and fewer than 3% of reported rapes result in conviction. Cases are closed before they are investigated and DNA evidence sits for years untested and disregarded

Rape in this country is not treated as a crime of brutal violence but as a parlor game of he said / she said. It might be laughable if it didn’t work so much of the time.

Given all this, it seems fair to ask whether rape is actually a crime.

In 1984, the Boston Sexual Assault Unit was formed as a result of a series of break-ins and rapes that terrorized the city, of which Michelle’s own horrific rape was the last. Twenty years later, after a career of working with victims like herself, Michelle decides to find out what happened to her case and why she never heard from the police again after one brief interview.

Is Rape a Crime? is an expert blend of memoir and cultural investigation, and Michelle's story is a rallying cry to reclaim our power and right our world.

Michelle Bowdler is the Executive Director of Health & Wellness at Tufts University and, after graduating from the Harvard School of Public Health, has worked on social justice issues related to rape for over a decade. Is Rape a Crime? is her first book. She is a recipient of a 2017 Barbara Deming Memorial Award and has been a Fellow at Ragdale and MacDowell. Michelle’s writing has been published in the New York Times and her essays “Eventually You Tell Your Kids” and “Babelogue” were nominated for Pushcart Prizes. Is Rape a Crime was longlisted for the National Book Award in Nonfiction.

About The Playwright's House:

Happily married, backed by a powerful mentor, and with career prospects that would take him abroad, Serguey has more than any young Cuban lawyer could ask for. But when his estranged brother Victor appears with news that their father—famed theater director Felipe Blanco—has been detained for what he suspects are political reasons, Serguey’s privileged life is suddenly shaken.

A return to his childhood home in Havana’s decaying suburbs—a place filled with art, politics, and the remnants of a dissolving family—reconnects Serguey with his troubled past. He learns of an elusive dramaturge’s link to Felipe, a man who could be key to his father’s release. With the help of a social media activist and his wife’s ties with the Catholic Church, Serguey sets out to unlock the mystery of Felipe’s arrest and, in the process, is forced to confront the reasons for the hostility between him and Victor: two violent childhood episodes that scarred them in unforgettable ways. On the verge of imprisonment, Serguey realizes he must make a decision regarding not just his father, but his family and his own future, a decision which, under the harsh shadow of a communist state, he cannot afford to regret.

Dariel Suarez is the Cuban-born author of the debut novel, The Playwright's House. He is an inaugural City of Boston Artist Fellow and the Education Director at GrubStreet, the country’s largest independent creative writing center. He has been published widely, and is currently at work on a second novel about the effects of human trafficking, migration, and the broken promises of the American dream through the lens of a multicultural family.

William Stoner and the Battle for the Inner Life: Bookmarked (Paperback)

Stoner is a 1965 novel by the American writer John Williams. It tells the story of William Stoner, who attends the state university to study agronomy, but instead falls in love with English literature and becomes an academic.

Is Rape a Crime?: A Memoir, an Investigation, and a Manifesto (Paperback)