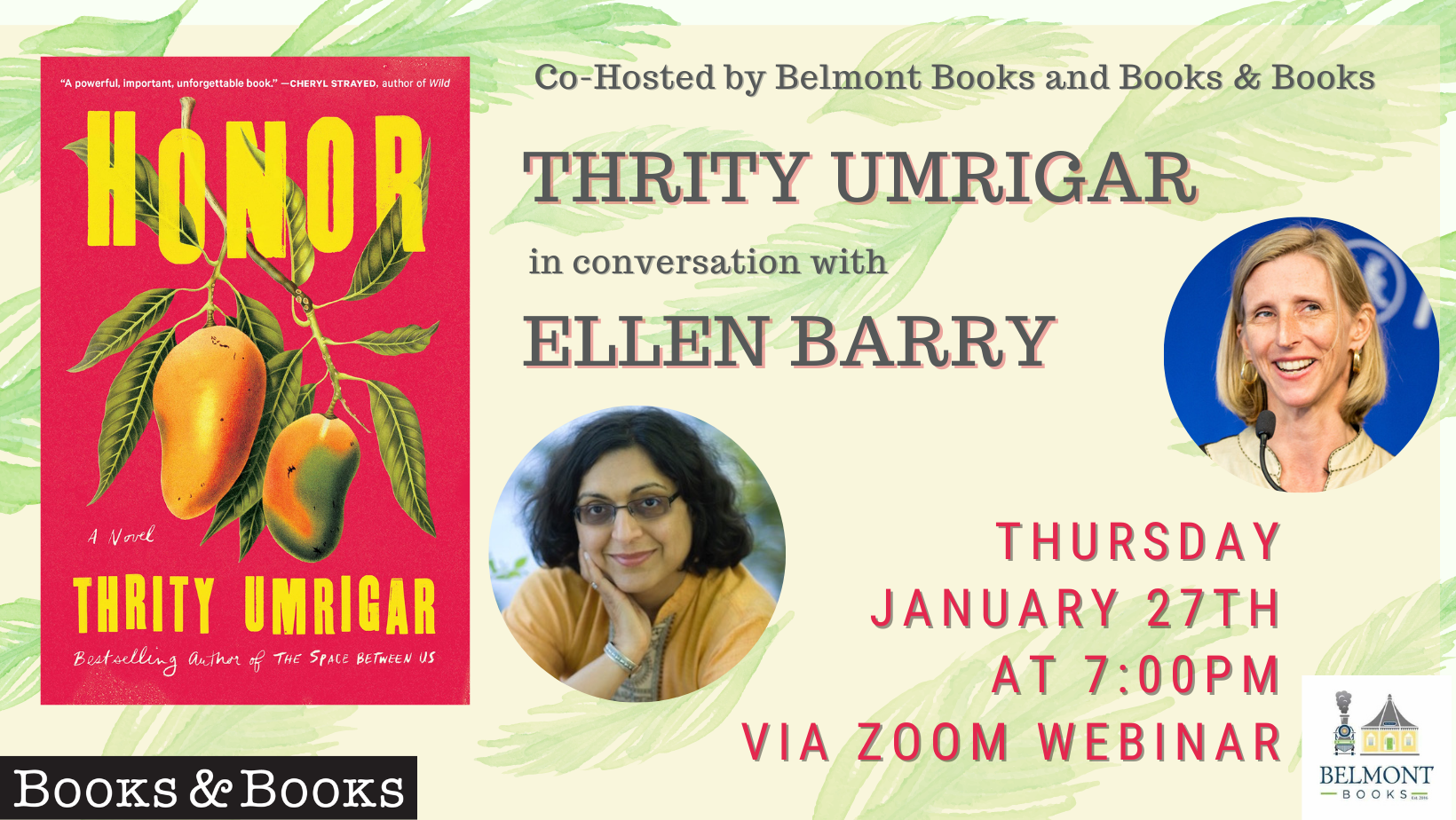 We are so excited to announce that Belmont Books and Books & Books will be co-hosting a virtual evening with author Thrity Umrigar, in conversation with Ellen Barry, whose New York Times articles inspired Thrity to write her new book, Honor, a Reese's Book Club pick! Register for this event on Eventbrite.

In this riveting and immersive novel, bestselling author Thrity Umrigar tells the story of two couples and the sometimes dangerous and heartbreaking challenges of love across a cultural divide.

Indian American journalist Smita has returned to India to cover a story, but reluctantly: long ago she and her family left the country with no intention of ever coming back. As she follows the case of Meena—a Hindu woman attacked by members of her own village and her own family for marrying a Muslim man—Smita comes face to face with a society where tradition carries more weight than one’s own heart, and a story that threatens to unearth the painful secrets of Smita’s own past. While Meena’s fate hangs in the balance, Smita tries in every way she can to right the scales. She also finds herself increasingly drawn to Mohan, an Indian man she meets while on assignment. But the dual love stories of Honor are as different as the cultures of Meena and Smita themselves: Smita realizes she has the freedom to enter into a casual affair, knowing she can decide later how much it means to her.

In this tender and evocative novel about love, hope, familial devotion, betrayal, and sacrifice, Thrity Umrigar shows us two courageous women trying to navigate how to be true to their homelands and themselves at the same time.

Thrity Umrigar is the bestselling author of eight novels, including The Space Between Us, which was a finalist for the PEN/Beyond Margins Award, as well as a memoir and three picture books. Her books have been translated into several languages and published in more than fifteen countries. She is the winner of a Lambda Literary Award and a Seth Rosenberg Award and is Distinguished Professor of English at Case Western Reserve University. A recipient of the Nieman Fellowship to Harvard, she has contributed to the  Boston Globe , the Washington Post, the New York Times and Huffington Post.

Ellen Barry is currently a Boston-based reporter for the New York Times. In 2004, she was a Pulitzer Prize finalist in beat reporting, for a set of articles on mental health. She is the recipient of the American Society of Newspaper Editors 2004 Jesse Laventhol Prize for Deadline News Reporting by a Team for her work on the Station Nightclub Fire. Ms. Barry, a Yale graduate, lived in the Soviet Union as a child, and began her career at the Moscow Times.

“In the way A Thousand Splendid Suns told of Afghanistan’s women, Thrity Umrigar tells a story of India with the intimacy of one who knows the many facets of a land both modern and ancient, awash in contradictions.” —Lisa Wingate, #1 New York Times bestselling author of Be