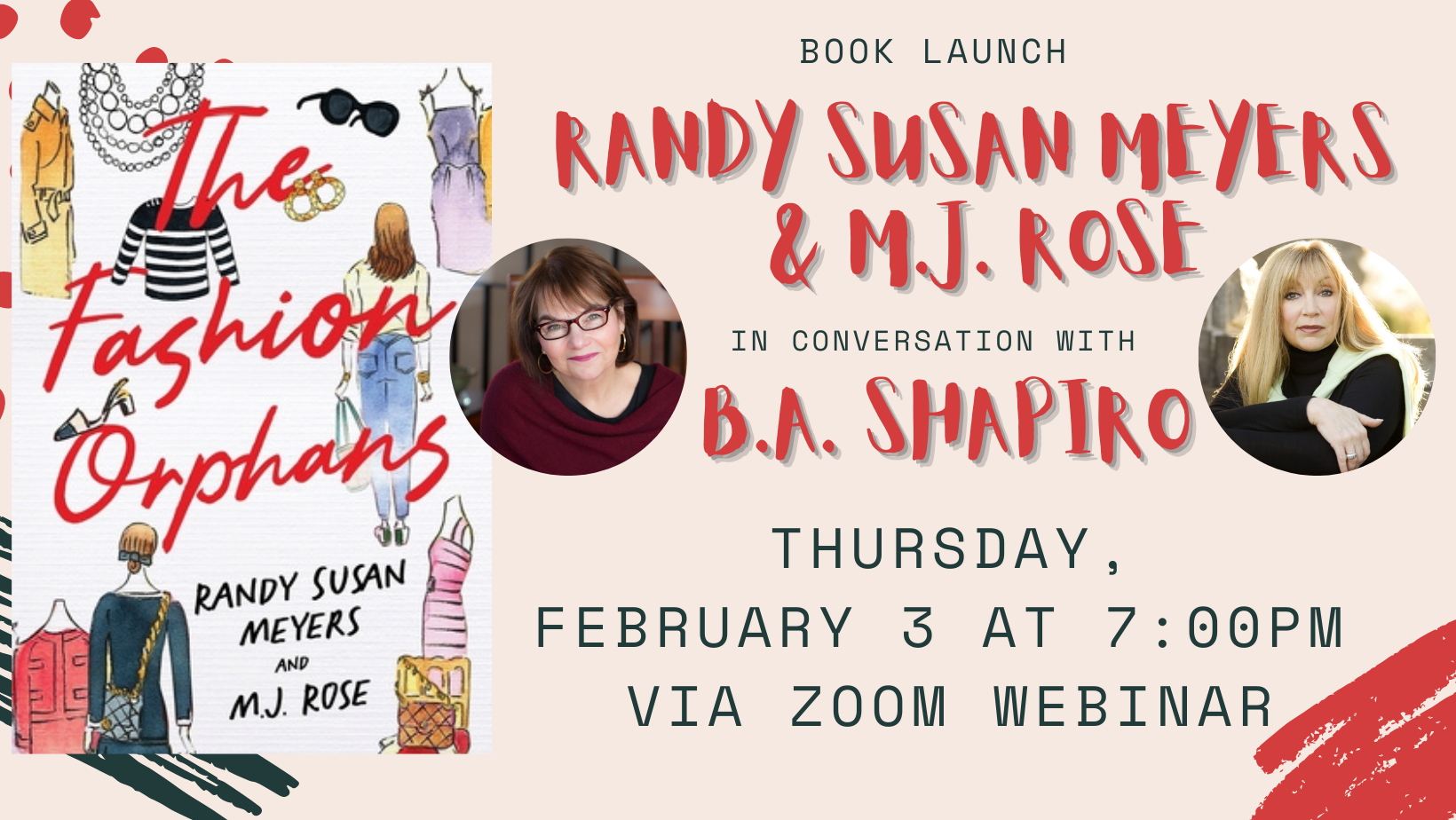 Please join us and bestselling authors Randy Susan Meyers and M.J. Rose as they launch their new book, The Fashion Orphans, and discuss it with bestselling author B.A. Shapiro! Register for this Zoom webinar here.

About The Fashion Orphans:

Two sisters find that forgiveness never goes out of style when they inherit their mother's jackets, purses... and pearls of wisdom.

Estranged half-sisters Gabrielle Winslow and Lulu Quattro seem to have only two things in common: mounds of debt and coils of unresolved enmity toward Bette Bradford, their controlling and imperious recently deceased mother.

Gabrielle, the firstborn, was raised in relative luxury on Manhattan's rarefied Upper East Side. Now, at fifty-five, her life as a Broadway costume designer married to a heralded Broadway producer has exploded in divorce.

Lulu, who spent half her childhood under the tutelage of her working-class Brooklyn grandparents, is a grieving widow at forty-eight. With her two sons grown, her life feels reduced to her work at the Ditmas Park bakery owned by her late husband's family.

The two sisters arrive for the reading of their mother's will expecting to divide a sizable inheritance, pay off their debts, and then turn their backs on each other once again.

But to their shock, what they have been left is their mother's secret walk-in closet jammed with luxury designer clothes and accessories mostly from Chanel.

Contemplating the scale of their mother's self-indulgence, the sisters can't help but wonder if Lauren Weisberger had it wrong: because it seems, in fact, that the devil wore Chanel. But as they being to explore their mother's collection, meet and fall in love with her group of warm, wonderful friends, and find inspiring messages tucked away in her treasures - it seems as though their mother is in fact advising Lulu and Gabrielle from the beyond - helping them rediscover themselves and restore their relationship with each other.

Randy Susan Meyers is the internationally bestselling author of six novels, including Waisted, The Widow of Wall Street, Accidents of Marriage, The Comfort of Lies, and The Murderer’s Daughters. Her books have been designated one of the ten best works of fiction in 2010, 2014, and 2017 by the Massachusetts Center for the Book, an affiliate of the Library of Congress. She lives in Boston with her husband, where she teaches writing at the GrubStreet writing center. Her novels have been translated into more than twenty-six languages.

M. J. Rose is the New York Times and USA Today bestselling author of more than eighteen novels, including The Book of Lost Fragrances and Cartier’s Hope. Among other awards, her last eleven novels have all appeared on the Indie Next List. The Fox TV series Past Lives was based on M. J.’s novel The Reincarnationist. Her books have been translated into more than thirty languages. She is also the founder of AuthorBuzz.com and the cofounder of 1001DarkNights.com and Blue Box Press.

This masterful novel of psychological suspense from the New York Times bestselling author of The Art Forger follows a cast of unforgettable characters whose lives intersect when a harrowing accident occurs at the Metropolis Storage Warehouse in Cambridge, Massachusetts.

But was it really an accident? Was it suicide? A murder? Six mysterious characters, who rent units in, or are connected to, the self-storage facility, must now reevaluate their lives. We meet Serge, an unstable but brilliant street photographer who lives in his unit, which overflows with thousands of undeveloped pictures; Zach, the building’s owner, who develops Serge’s photos as he searches for clues to the accident; Marta, an undocumented immigrant who is finishing her dissertation and hiding from ICE; Liddy, an abused wife and mother, who recreates her children’s bedroom in her unit; Jason, who has left his corporate firm and now practices law from his storage unit; and Rose, the office manager, who takes kickbacks to let renters live in the building and has her own complicated family history.

The characters have a variety of backgrounds: they are different races; they practice different religions; they’re young and they’re not so young; they are rich, poor, and somewhere in the middle. As they dip in and out of one another’s lives, fight circumstances that are within and also beyond their control, and try to discover the details of the accident, Shapiro both dismantles the myth of the American dream and builds tension to an exciting climax.

For readers of Janelle Brown, Lucy Foley, Megan Abbott, and Laura Lipmann, Metropolis is an original, spellbinding, and moving story of what we hang on to, what we might need to let go, and how unexpected events can lead us to discover our truest selves.

B. A. Shapiro is the bestselling author of The Collector's Apprentice, The Muralist, and The Art Forger, which won the New England Book Award for Fiction and the Boston Authors Society Award for Fiction, among other honors. Her upcoming book is Metropolis. Her books have been selected as community reads in numerous cities and translated throughout the world. Before becoming a novelist, she taught sociology at Tufts University and creative writing at Northeastern University. She and her husband, Dan, divide their time between Boston and Florida.

Two sisters find that forgiveness never goes out of style when they inherit their mother's jackets, purses... and pearls of wisdom.

Estranged half-sisters Gabrielle Winslow and Lulu Quattro seem to have only two things in common: mounds of debt and coils of unresolved enmity toward Bette Bradford, their controlling and imperious recently deceased mother.

The New York Times bestselling author of The Art Forger delivers a spellbinding and moving novel about what we hang on to, what we might need to let go, and how unexpected events can lead us to deeper truths.