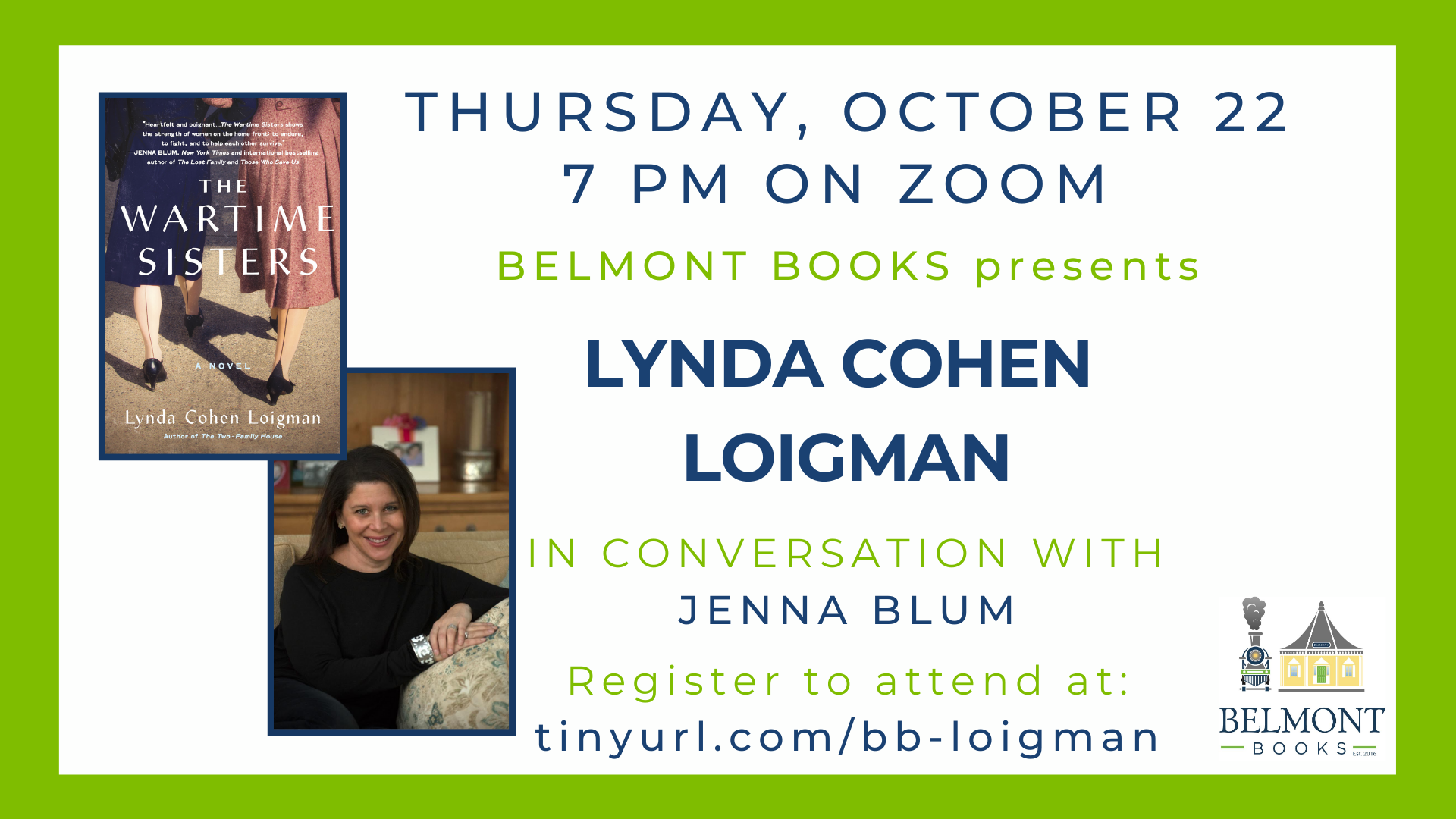 Join us for a great conversation between Lynda Cohen Loigman, author of The Wartime Sisters, and Jenna Blum, author of The Lost Family. This event will be held on Zoom. Click here to register.

About The Wartime Sisters:

For fans of Lilac Girls, the next powerful novel from the author of Goodreads Choice Awards semifinalist The Two-Family House about two sisters working in a WWII armory, each with a deep secret.

"Loigman’s strong voice and artful prose earn her a place in the company of Alice Hoffman and Anita Diamant, whose readers should flock to this wondrous new book." —Pam Jenoff, New York Times bestselling author of The Orphan’s Tale

"The Wartime Sisters shows the strength of women on the home front: to endure, to fight, and to help each other survive.” —Jenna Blum, New York Times and international bestselling author of The Lost Family and Those Who Save Us

Two estranged sisters, raised in Brooklyn and each burdened with her own shocking secret, are reunited at the Springfield Armory in the early days of WWII. While one sister lives in relative ease on the bucolic Armory campus as an officer’s wife, the other arrives as a war widow and takes a position in the Armory factories as a “soldier of production.” Resentment festers between the two, and secrets are shattered when a mysterious figure from the past reemerges in their lives.

Lynda Cohen Loigman grew up in Longmeadow, MA. She received a B.A. in English and American Literature from Harvard College and a J.D. from Columbia Law School. Her debut novel, Two-Family House, was a USA Today bestseller and a nominee for the Goodreads 2016 Choice Awards in Historical Fiction. Her second novel, The Wartime Sisters, was selected as a Woman’s World Book Club pick and a Best Book of 2019 by Real Simple Magazine. She is currently at work on her third novel.

About The Lost Family:

The Lost Family is an extraordinary read, the kind of book that makes you sob and smile, the kind that gives you hope…. It is compassionate, masterful and disturbingly contemporary."—Tatiana de Rosnay, bestselling author of Sarah’s Key

The New York Times bestselling author of Those Who Save Us creates a vivid portrait of marriage, family, and the haunting grief of World War II in this emotionally charged, beautifully rendered story that spans a generation, from the 1960s to the 1980s.

In 1965 Manhattan, patrons flock to Masha’s to savor its brisket bourguignon and impeccable service and to admire its dashing owner and head chef Peter Rashkin. With his movie-star good looks and tragic past, Peter, a survivor of Auschwitz, is the most eligible bachelor in town. But Peter does not care for the parade of eligible women who come to the restaurant hoping to catch his eye. He has resigned himself to a solitary life. Running Masha’s consumes him, as does his terrible guilt over surviving the horrors of the Nazi death camp while his wife, Masha—the restaurant’s namesake—and two young daughters perished.

Then exquisitely beautiful June Bouquet, an up-and-coming young model, appears at the restaurant, piercing Peter’s guard. Though she is twenty years his junior, the two begin a passionate, whirlwind courtship. When June unexpectedly becomes pregnant, Peter proposes, believing that beginning a new family with the woman he loves will allow him to let go of the horror of the past. But over the next twenty years, the indelible sadness of those memories will overshadow Peter, June, and their daughter Elsbeth, transforming them in shocking, heartbreaking, and unexpected ways.

Jenna Blum artfully brings to the page a husband devastated by a grief he cannot name, a frustrated wife struggling to compete with a ghost she cannot banish, and a daughter sensitive to the pain of both her own family and another lost before she was born. Spanning three cinematic decades, The Lost Family is a charming, funny, and elegantly bittersweet study of the repercussions of loss and love.

Jenna Blum is the New York Times and number one international bestselling author of the novels Those Who Save Us and The Stormchasers. She was also voted one of the favorite contemporary women writers by Oprah.com readers. Jenna is based in Boston, where she earned her MA from Boston University and has taught fiction and novel workshops for Grub Street Writers for twenty years. For more about Jenna, please visit www.jennablum.com

The Wartime Sisters: A Novel (Paperback)

For fans of Lilac Girls, the next powerful novel from the author of Goodreads Choice Awards semifinalist The Two-Family House about two sisters working in a WWII armory, each with a deep secret.

The Lost Family: A Novel (Paperback)

The Lost Family is an extraordinary read, the kind of book that makes you sob and smile, the kind that gives you hope…. It is compassionate, masterful and disturbingly contemporary."—Tatiana de Rosnay, bestselling author of Sarah’s Key