VIRTUAL: Katherine A. Sherbrooke and Alexi Pappas in Conversation with Lynne Griffin 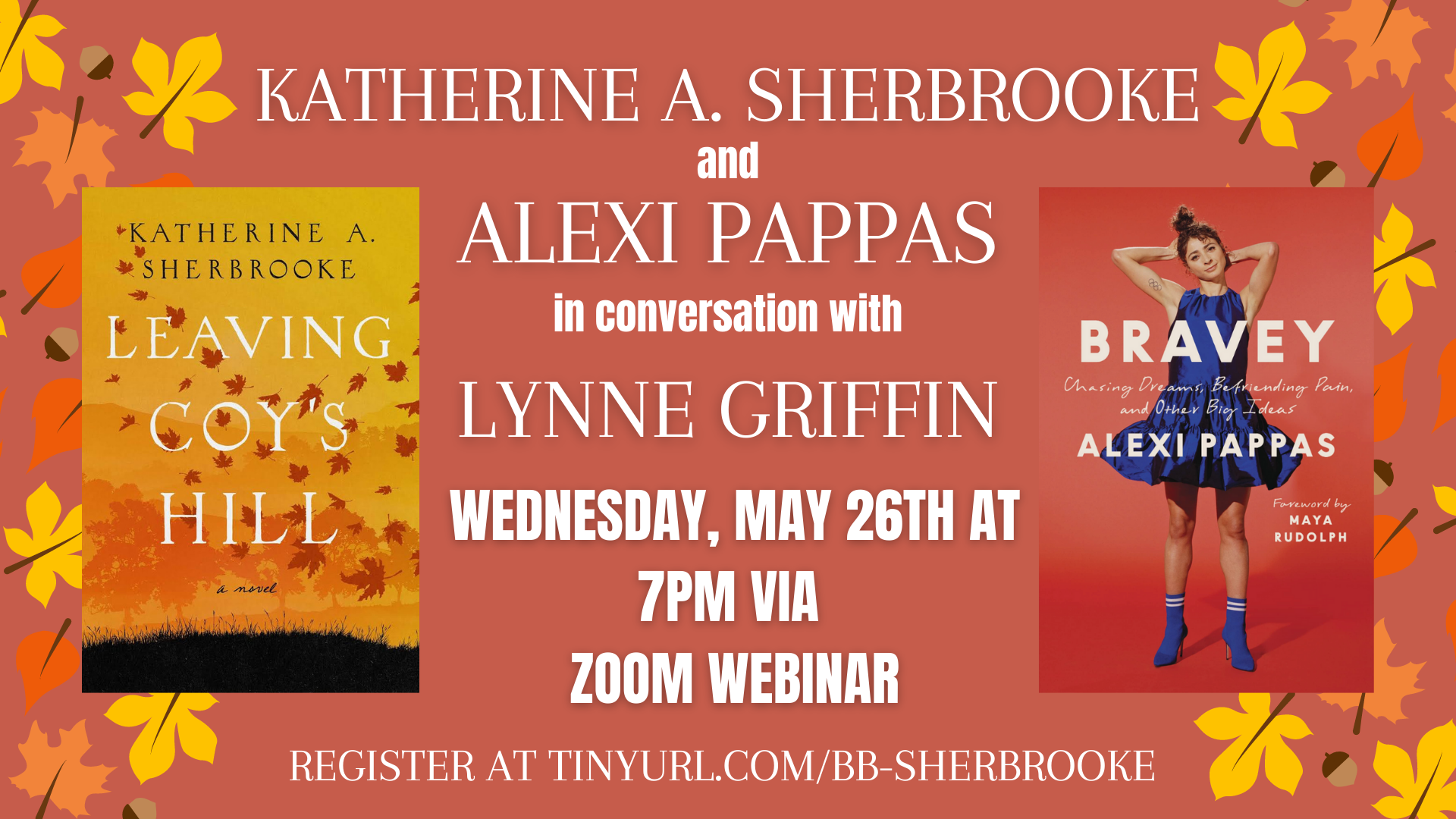 Please join us as Katherine A. Sherbrooke, author of Leaving Coy's Hill, and Alexi Pappas, author of Bravey, discuss how leaders navigate the fine line between confidence and self-doubt, with author Lynne Griffin. Register on Eventbrite!

An unforgettable story about the triumphs and travails of a woman unwilling to play by the rules, based on the the remarkable life of pioneering feminist and abolitionist Lucy Stone.

Born on a farm in 1818, Lucy Stone dreamt of extraordinary things for a girl of her time, like continuing her education beyond the eighth grade and working for the abolitionist cause, and of ordinary things, such as raising a family of her own. But when she learns that the Constitution affords no rights to married women, she declares that she will never marry and dedicates her life to fighting for change.

At a time when it is considered promiscuous for women to speak in public, Lucy risks everything for the anti-slavery movement, her powerful oratory mesmerizing even her most ardent detractors as she rapidly becomes a household name. And when she begins to lecture on the “woman question,” she inspires a young Susan B. Anthony to join the movement. But life as a crusader is a lonely one.

When Henry Blackwell, a dashing and forward-thinking man, proposes a marriage of equals, Lucy must reconcile her desire for love and children with her public persona and the legal perils of marriage she has long railed against. And when a wrenching controversy pits Stone and Anthony against each other, Lucy makes a decision that will impact her legacy forever.

Based on true events, Leaving Coy’s Hill is a timeless story of women’s quest for personal and professional fulfillment within society’s stubborn constraints. And as an abolitionist and women’s rights activist fighting for the future of a deeply divided country, Lucy Stone’s quest to live a life on her own terms is as relevant as ever. In this “propulsive,” “astonishing,” and “powerful” story, Katherine Sherbrooke brings to life a true American heroine for a new generation.

Katherine A. Sherbrooke is the author of Fill the Sky, which was a finalist for the Mary Sarton Award for Contemporary Fiction and the Foreward Indies Book of the Year, and won a 2017 Independent Press Award. She is Chair of the GrubStreet Creative Writing Center in Boston and lives south of the city with her husband, two sons, and black lab.

About Bravey: Chasing Dreams, Befriending Pain, and Other Big Ideas:

When “Renaissance runner” (New York Times) Alexi Pappas—Olympic athlete, actress, filmmaker, and writer—was four years old, her mother died by suicide, drastically altering the course of Pappas’s life and setting her on a search for female role models. When her father signed his bereaved daughter up for sports teams as a way to keep her busy, female athletes became the first women Pappas looked up to, and her Olympic dream was born. At the same time, Pappas had big creative dreams, too: She wanted to make movies, write, and act. Despite setbacks and hardships, Pappas refused to pick just one lane. She put in a tremendous amount of hard work and wouldn’t let anything stand in her way until she achieved all of her dreams, however unrelated they may seem to outsiders. In a single year, 2016, she made her Olympic debut as a distance runner and wrote, directed, and starred in her first feature film.

But great highs are often accompanied by deep lows; with joy comes sorrow. In Bravey, Pappas fearlessly and honestly shares her battle with post-Olympic depression and describes how she emerged on the other side as a thriving and self-actualized woman. Unflinching, exuberant, and always entertaining, Bravey showcases Pappas’s signature, charming voice as she reflects upon the touchstone moments in her life and the lessons that have powered her career as both an athlete and an artist—foremost among them, how to be brave.

Pappas’s experiences reveal how we can all overcome hardship, befriend pain, celebrate victory, relish the loyalty found in teammates, and claim joy. In short: how every one of us can become a bravey.

Alexi Pappas is an award-winning writer, filmmaker, and Olympic athlete. Her writing has appeared in The New York Times, Runner’s World, Women’s Running, Sports Illustrated, The Atlantic, and Outside, among other publications, and she has been profiled in The New York Times, Sports Illustrated, New York, and Rolling Stone. Pappas co-wrote, co-directed, and starred in the feature film Tracktown with Rachel Dratch and Andy Buckley. Most recently, she co-wrote and starred alongside Nick Kroll in Olympic Dreams, the first non-documentary-style movie to ever be filmed at the Olympic Games. A Greek American, Pappas holds the Greek national record in the 10,000-meters and competed for Greece in the 2016 Olympics. She lives in Los Angeles, California.

About The Dangers of an Ordinary Night: (available for pre-order)

On a chilly fall evening at the prestigious Performing Arts High School of Boston, best friends Tali Carrington and June Danforth go missing after auditioning for a play. They're last seen in grainy, out-of-focus surveillance footage that shows them walking away from the school. Two days later in a town south of Boston, Tali is found disoriented and traumatized by the ocean's edge, while June is pronounced dead at the scene.

Tali's mother, Nell, is so bent on protecting her daughter from further emotional harm that she ignores rumors of her husband’s involvement and enlists the help of Cynthia Rawlins, a reunification therapist with personal insight into the riptide that hides below the surface of every unsuspecting family. Meanwhile, Detective Fitz Jameson uncovers a criminal undertow involving the high school’s overachieving students, and finally sees an opportunity for personal redemption from a secret that’s haunted him for years.

As Nell, Cynthia, and Fitz confront their own contributions to the scandals that beleaguer them, their lives turn out to be more deeply intertwined than they'd ever imagined. In the end, they must decide what lengths they're willing to go to protect the people they love while also saving themselves.

Lynne Reeves Griffin is a nationally-recognized counselor and novelist. Writing as Lynne Reeves, her new novel of domestic suspense will be published November 9, 2021. The Dangers of an Ordinary Night is a twisty affecting read that combines a crime story with a devastating domestic drama about addiction and the blind spots we bring to our most precious relationships. Hank Phillipi Ryan calls it, "Shatteringly original, intensely suspenseful, and written with a tender eloquence that will break your heart." To learn more about Lynne's work, visit LynneGriffin.com.

An unforgettable story about the triumphs and travails of a woman unwilling to play by the rules, based on the the remarkable life of pioneering feminist and abolitionist Lucy Stone.

Born on a farm in 1818, Lucy Stone dreamt of extraordinary things for a girl of her time, like continuing her education beyond the eighth grade and working for the abolitionist cause, and of o

The Dangers of an Ordinary Night: A Novel (Hardcover)