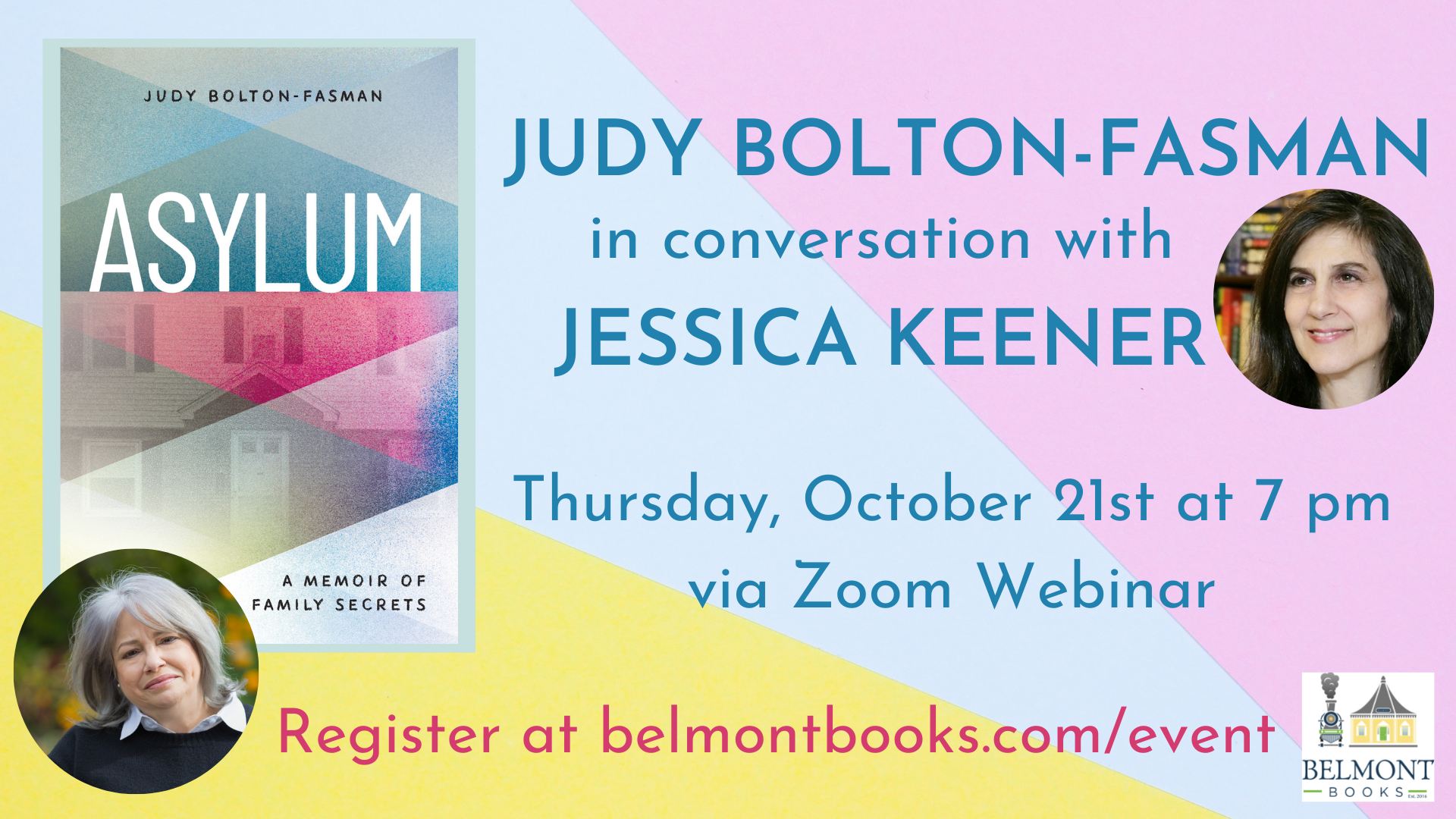 Please join us and author Judy Bolton-Fasman, as she discusses her memoir, Asylum: A Memoir of Family Secrets, with author Jessica Keener! Register for this Zoom webinar here.

How much do we really know about the lives of our parents and the secrets lodged in their past? Judy Bolton-Fasman's fascinating saga, Asylum: A Memoir of Family Secrets, recounts the search for answers to the mysteries embedded in the lives of her Cuban-born mother, Matilde Alboukrek Bolton and her elusive, Yale-educated father, K. Harold Bolton. In the prefatory chapter, "Burn This," Judy receives a thick letter from her father and conjectures that the contents will reveal the long hidden explanations, confessions, and secrets that will unlock her father's cryptic past. Just as she is about to open the portal to her father's "transtiendas," his dark hidden secrets, Harold Bolton phones Judy and instructs her to burn the still unopened letter. With the flick of a match, Judy ignites her father's unread documents, effectively destroying the answers to long held questions that surround her parents' improbable marriage and their even more secretive lives. Judy Bolton, girl detective, embarks on the life-long exploration of her bifurcated ancestry; Judy inherits a Sephardic, Spanish/Ladino-speaking culture from her mother and an Ashkenazi, English-only, old-fashioned American patriotism from her father. Amid the Bolton household's cultural, political, and psychological confusion, Judy is mystified by her father's impenetrable silence; and, similarly confounded by her mother's fabrications, not the least of which involve rumors of a dowry pay-off and multiple wedding ceremonies for the oddly mismatched 40-year-old groom and the 24-year-old bride. Contacting former associates, relatives, and friends; accessing records through the Freedom of Information Act; traveling to Cuba to search for clues, and even reciting the Mourner's Kaddish for a year to gain spiritual insight into her father; these decades-long endeavors do not always yield the answers Judy wanted and sometimes the answers themselves lead her to ask new questions. Among Asylum's most astonishing, unsolved mysteries is Ana Hernandez's appearance at the family home on Asylum Avenue in West Hartford, Connecticut. Ana is an exchange student from Guatemala whom Judy comes to presume to be her paternal half-sister. In seeking information about Ana, Judy's investigations prove to be much like her entire enterprise--both enticing and frustrating. Was Ana just a misconstrued memory, or is she a still living piece of the puzzle that Judy has spent her adult life trying to solve? Readers will relish every step and stage of Judy's investigations and will begin to share in her obsession to obtain answers to the mysteries that have haunted her life. The suspense, the clairvoyant prophecies, the discoveries, the new leads, the dead-ends, the paths not taken--all capture our attention in this absorbing and fascinating memoir.--Judy Bolton-Fasman "Publisher.

Judy Bolton-Fasman is a writer of memoir and creative non-fiction. Judy has published essays and reviews in a variety of venues including The New York Times, The Boston Globe, McSweeney’s, The Rumpus, Cognoscenti, Brevity and Catapult. She has recently received a Pushcart Prize nomination and is a four-time recipient of the Simon Rockower Award for Essay from the American Jewish Press Association.

About Strangers in Budapest:

“Jessica Keener has written a gorgeous, lyrical, and sweeping novel about the tangled web of past and present. Suspenseful, perceptive, fast-paced, and ultimately restorative.” —Susan Henderson, author of Up from the Blue

Budapest: gorgeous city of secrets, with ties to a shadowy, bloody past.  It is to this enigmatic European capital that a young American couple, Annie and Will, move from Boston with their infant son shortly after the fall of the Communist regime. For Annie, it is an effort to escape the ghosts that haunt her past, and Will wants simply to seize the chance to build a new future for his family.

Eight months after their move, their efforts to assimilate are thrown into turmoil when they receive a message from friends in the US asking that they check up on an elderly man, a fiercely independent Jewish American WWII veteran who helped free Hungarian Jews from a Nazi prison camp. They soon learn that the man, Edward Weiss, has come to Hungary to exact revenge on someone he is convinced seduced, married, and then murdered his daughter.

Annie, unable to resist anyone’s call for help, recklessly joins in the old man’s plan to track down his former son-in-law and confront him, while Will, pragmatic and cautious by nature, insists they have nothing to do with Weiss and his vendetta. What Annie does not anticipate is that in helping Edward she will become enmeshed in a dark and deadly conflict that will end in tragedy and a stunning loss of innocence.

Atmospheric and surprising, Strangers in Budapest is, as bestselling novelist Caroline Leavitt says, a “dazzlingly original tale about home, loss, and the persistence of love.”

Jessica Keener is the author of the national bestselling novel Night Swim and a collection of award-winning short stories, Women in Bed. Her work has appeared in O, The Oprah Magazine, Redbook, the Boston Globe, Agni, and other publications, and she has taught English literature and writing at Brown University, Boston University, the University of Miami, and GrubStreet. She lives in the Boston area. Learn more at www.jessicakeener.com.

How much do we really know about the lives of our parents and the secrets lodged in their past? Judy Bolton-Fasman's fascinating saga, Asylum: A Memoir of Family Secrets, recounts the search for answers to the mysteries embedded in the lives of her Cuban-born mother, Matilde Alboukrek Bolton and her elusive, Yale-educated father, K. Harold Bolton.

Strangers in Budapest: A Novel (Paperback)

“Jessica Keener has written a gorgeous, lyrical, and sweeping novel about the tangled web of past and present.