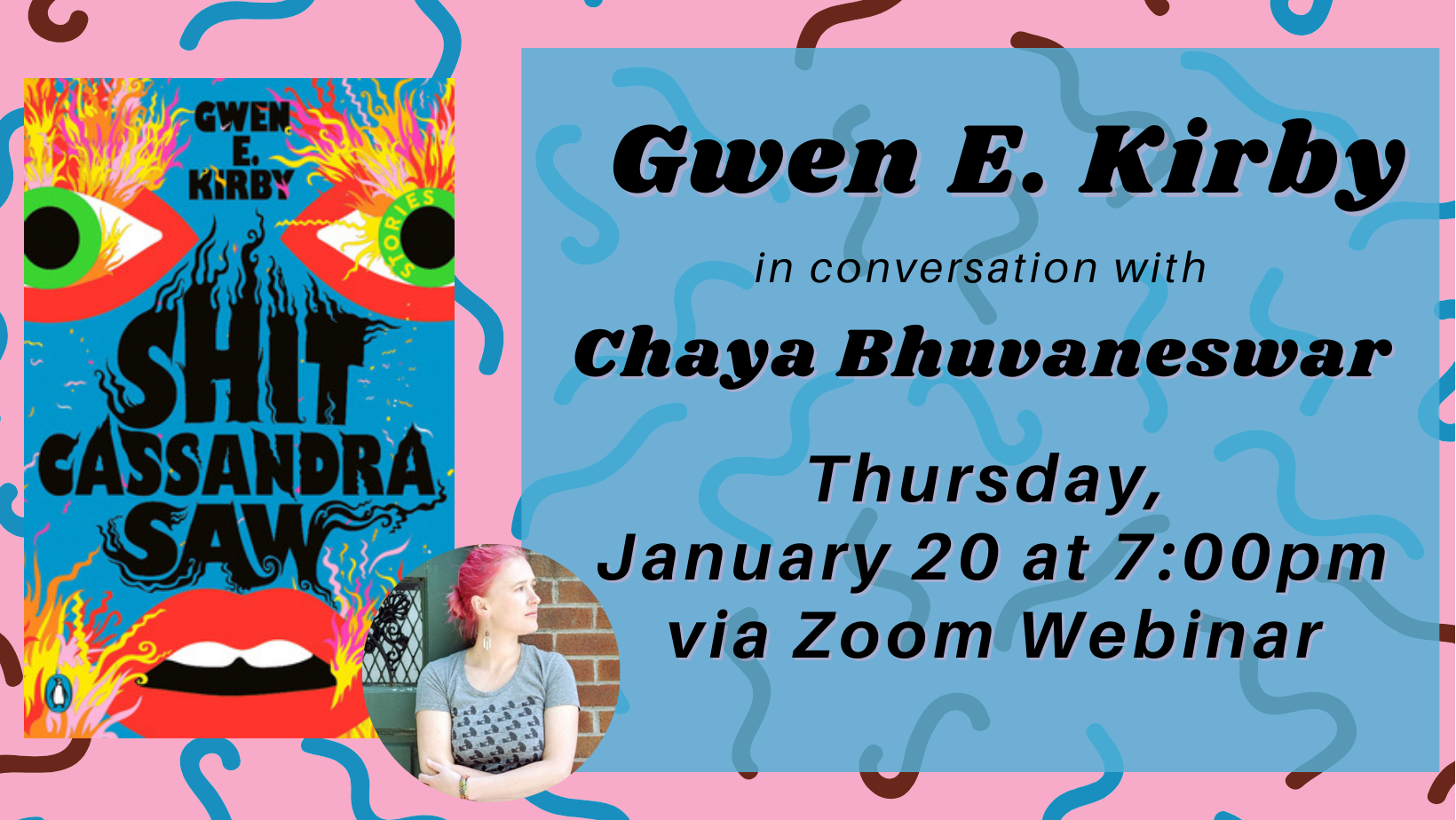 Please join us and author Gwen E. Kirby for a discussion of her new book, Shit Cassandra Saw: Stories, as she discusses it with author Chaya Bhuvaneswar! Register for this Zoom webinar here.

Margaret Atwood meets Buffy in these funny, warm, and furious stories of women at their breaking points, from Hellenic times to today.

Cassandra may have seen the future, but it doesn't mean she's resigned to telling the Trojans everything she knows. In this ebullient collection, virgins escape from being sacrificed, witches refuse to be burned, whores aren't ashamed, and every woman gets a chance to be a radioactive cockroach warrior who snaps back at catcallers. Gwen E. Kirby experiments with found structures--a Yelp review, a WikiHow article--which her fierce, irreverent narrators push against, showing how creativity within an enclosed space undermines and deconstructs the constraints themselves. When these women tell the stories of their triumphs as well as their pain, they emerge as funny, angry, loud, horny, lonely, strong protagonists who refuse to be secondary characters a moment longer. From "The Best and Only Whore of Cym Hyfryd, 1886" to the "Midwestern Girl Is Tired of Appearing in Your Short Stories," Kirby is playing and laughing with the women who have come before her and they are telling her, we have always been this way. You just had to know where to look.

Gwen E. Kirby is a writer and teacher. She hails from San Diego and is a proud graduate of Carleton College. She has an MFA from Johns Hopkins University and a PhD from the University of Cincinnati. Currently, she is the Associate Director of Programs and Finance for the Sewanee Writers’ Conference at the University of the South, where she also teaches creative writing. Her stories appear or are forthcoming in One Story, Tin House, Guernica, Mississippi Review, Ninth Letter, Blackbird, SmokeLong Quarterly, and elsewhere. Guest editor Aimee Bender selected her story “Shit Cassandra Saw . . .” for Best Small Fictions 2018 and it also appears in the 2018 Wigleaf Top 50. Her story “Midwestern Girl Is Tired of Appearing in Your Short Stories” won the 2017 DISQUIET Literary Prize for Fiction. She has received two Pushcart Prize special mentions and has been awarded scholarships to the Rivendell Writers’ Colony and the Sundress Academy for the Arts. She was the 2018-2019 George Bennett Fellow at Phillips Exeter Academy.

A woman grieves a miscarriage, haunted by the Buddha's birth. An artist with schizophrenia tries to survive hatred and indifference in small-town India by turning to the beauty of sculpture and dance. Orphans in India get pulled into a strange "rescue" mission aimed at stripping their mysterious powers. A brief but intense affair between two women culminates in regret and betrayal. A boy seeks memories of his sister in the legend of a woman who weds death. And fragments of history, from child brickmakers to slaves in Renaissance Portugal, are held up in brief fictions, burnished, made dazzling and unforgettable.

In seventeen remarkable stories, Chaya Bhuvaneswar spotlights diverse women of color--cunning, bold, and resolute--facing sexual harassment and racial violence, and occasionally inflicting that violence on each other. Winner of the 2017 Dzanc Short Story Collection Prize, White Dancing Elephants marks the emergence of a new and original voice in fiction and explores feminist, queer, religious, and immigrant stories with precision, drama, and compassion.

Chaya Bhuvaneswar is a physician and writer with work in Narrative Magazine, Tin House, Electric Lit, The Millions, Joyland, Michigan Quarterly Review and elsewhere. Her poetry and prose juxtapose Hindu epics, other myths and histories, and the survival of sexual harassment and racialized sexual violence by diverse women of color. She has received a MacDowell Colony fellowship, Sewanee Writers Conference scholarship and Henfield award for her writing. Follow her on Twitter at @chayab77 including for upcoming readings and events.

“Kirby has mastered the art of short fiction…A stunning collection from a writer whose talent and creativity seem boundless.”
—NPR