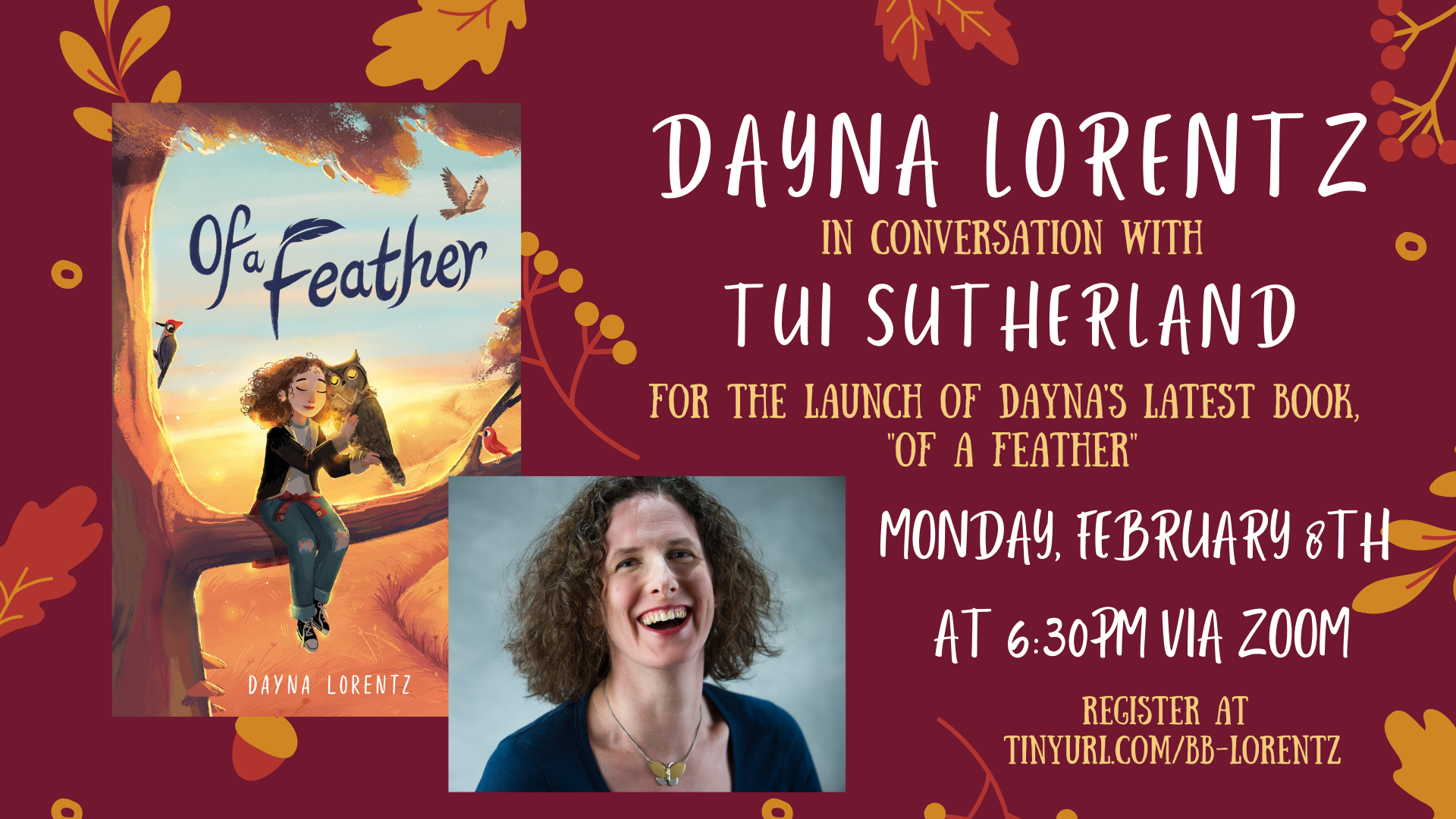 Please join us for this fun launch event where Dayna Lorentz will discuss her latest book, Of a Feather, with Tui Sutherland! Register for this Zoom Webinar here.

About Of a Feather:

"A perfect tale of outcasts, friendship, falconry, and the families we create.”--Tui T. Sutherland, New York Times bestselling author of the Wings of Fire series

In the vein of Barbara O’Connor’s Wish, a moving, poignant story told in alternating perspectives about a down-on-her-luck girl who rescues a baby owl, and how the two set each other free.

Great horned owl Rufus is eight months old and still can’t hunt. When his mother is hit by a car, he discovers just how dangerous the forest can be. Reenie has given up on adults and learned how to care for herself—a good thing, since she’s sent to live with an aunt she’s never met. Yet this aunt has a wonderful secret: she’s a falconer who agrees to help Reenie catch an injured passage hawk in the wild and rehabilitate it. When Reenie traps bedraggled Rufus, his eyes lock onto her heart, and they form a powerful friendship. But can Rufus learn to trust in the outside world and fly free? And can Reenie open her heart enough to truly soar?

This unique animal friendship story is filled with tons of cool falcon facts, plus hefty backmatter that includes a Q&A with a master falconer and wildlife rehabilitator and a glossary of falconry terms.

Dayna Lorentz is the author of the Dogs of the Drowned City trilogy and the No Safety in Numbers trilogy. She has worked in and around the foster care system, most recently as a law clerk in the Vermont family courts, but she only just started exploring the sport of falconry. Dayna lives in Vermont with her husband and two children.

About The Dark Secret (Wings of Fire Graphic Novel #4):

The #1 New York Times bestselling Wings of Fire series soars to new heights in the fourth graphic novel adaptation!
In the shadows, trouble is brewing . . .

When Starflight is stolen by his own tribe, he hopes to at least discover some of the long-held NightWing secrets -- what magical powers they really have, who they're allied with in the war, and where they've been living all this time.

But the truth about Starflight's tribe is more terrible than he ever imagined: Not only do the NightWings live in a dark, miserable place, but they've imprisoned several innocent RainWings there, too. Stranded and alone, Starflight only wants to get back to his friends. But the fate of two kingdoms now rests in his talons, and with no one to save him, Starflight will have to find a way to be brave . . . before it's too late.

TUI T. SUTHERLAND is the author of the New York Times and USA Today bestselling Wings of Fire series, the Menagerie trilogy, and the Pet Trouble series, as well as a contributing author to the bestselling Spirit Animals and Seekers series (as part of the Erin Hunter team). In 2009, she was a two-day champion on Jeopardy! She lives in Massachusetts with her wonderful husband, two awesome sons, and two very patient dogs. To learn more about Tui's books, visit her online at tuibooks.com.

Of a Feather (Hardcover)

"A perfect tale of outcasts, friendship, falconry, and the families we create.”--Tui T.

In the shadows, trouble is brewing . .