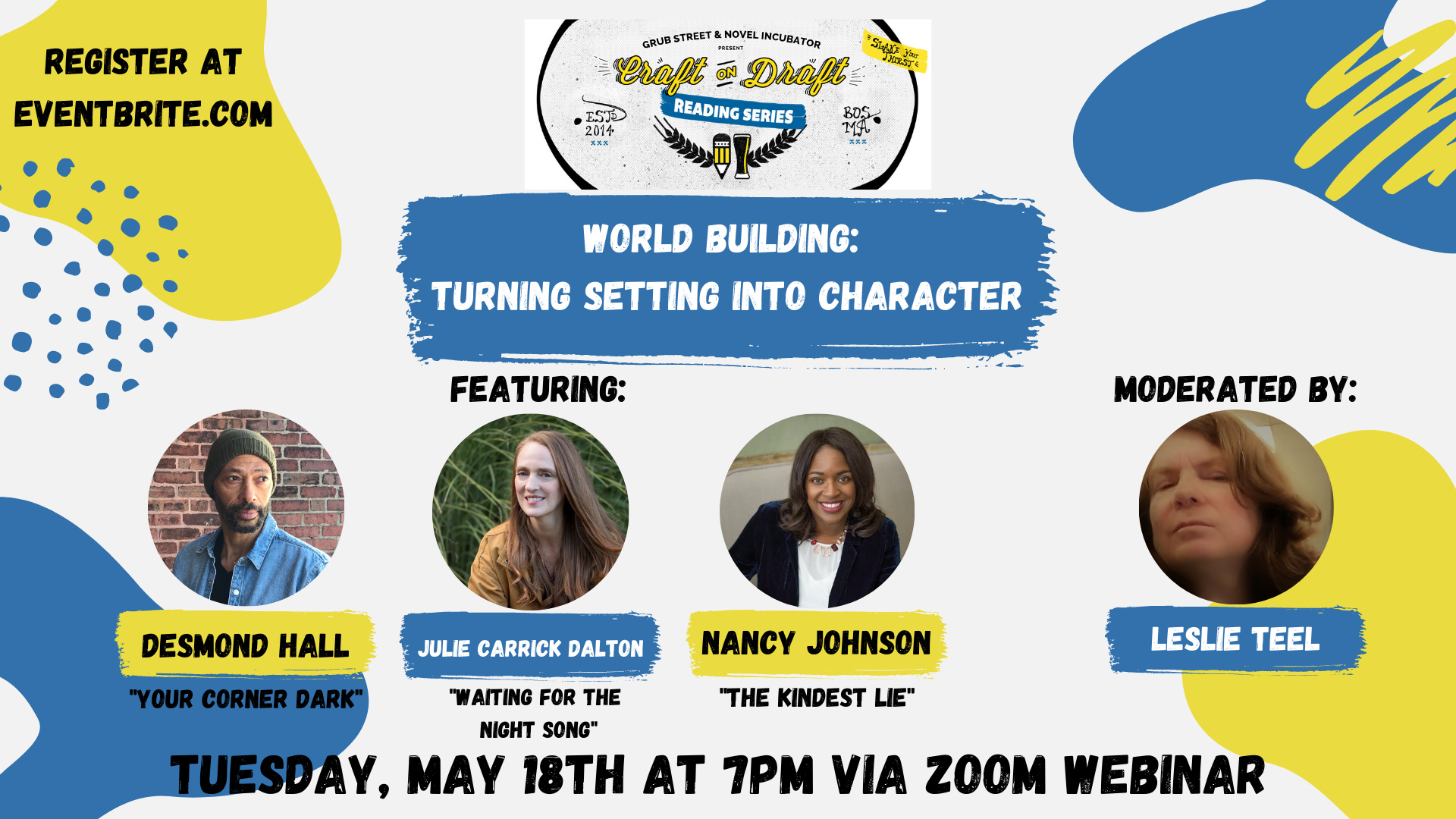 Craft on Draft  events are always great, and you won't want to miss this one! For some books, the setting is so pivotal, the story could not take place anywhere else. How do authors build such a strong sense of place that it becomes another character? Join us as authors Julie Carrick Dalton (Waiting for the Night Song), Desmond Hall (Your Corner Dark) and Nancy Johnson (The Kindest Lie) discuss building the worlds of their marvelous debut novels.  This event will be moderated by Leslie Teel. Register on Eventbrite!

About Your Corner Dark:

American Street meets Long Way Down in this searing and gritty debut novel that takes an unflinching look at the harsh realities of gang life in Jamaica and how far a teen is willing to go for family.

Things can change in a second:

The second Frankie Green gets that scholarship letter, he has his ticket out of Jamaica.

The second his longtime crush, Leah, asks him on a date, he’s in trouble.

The second his father gets shot, suddenly nothing else matters.

And the second Frankie joins his uncle’s gang in exchange for paying for his father’s medical bills, there’s no going back...or is there?

As Frankie does things he never thought he’d be capable of, he’s forced to confront the truth of the family and future he was born into—and the ones he wants to build for himself.

Desmond Hall was born in Jamaica, West Indies, and moved to Jamaica, Queens. He has worked as a high school biology and English teacher in East New York, Brooklyn; counseled teenage ex-cons after their release from Rikers Island; and served as Spike Lee’s creative director at Spike DDB. Desmond has served on the board of the Partnership for Drug-Free Kids and the Advertising Council and judged the One Show, the American Advertising Awards, and the NYC Downtown Short Film Festival. He’s also been named one of Variety magazine’s Top 50 Creatives to Watch. Desmond lives outside of Boston with his wife and two daughters.

About The Kindest Lie:

A promise could betray you.

It’s 2008, and the inauguration of President Barack Obama ushers in a new kind of hope. In Chicago, Ruth Tuttle, an Ivy-League educated Black engineer, is married to a kind and successful man. He’s eager to start a family, but Ruth is uncertain. She has never gotten over the baby she gave birth to—and was forced to leave behind—when she was a teenager. She had promised her family she’d never look back, but Ruth knows that to move forward, she must make peace with the past.

Returning home, Ruth discovers the Indiana factory town of her youth is plagued by unemployment, racism, and despair. As she begins digging into the past, she unexpectedly befriends Midnight, a young white boy who is also adrift and looking for connection. Just as Ruth is about to uncover a burning secret her family desperately wants to keep hidden, a traumatic incident strains the town’s already searing racial tensions, sending Ruth and Midnight on a collision course that could upend both their lives.

Powerful and revealing, The Kindest Lie captures the heartbreaking divide between Black and white communities and offers both an unflinching view of motherhood in contemporary America and the never-ending quest to achieve the American Dream.

A native of Chicago’s South Side, Nancy Johnson worked for more than a decade as an Emmy-nominated, award-winning television journalist at CBS and ABC affiliates nationwide. A graduate of Northwestern University and the University of North Carolina at Chapel Hill, she lives in downtown Chicago and manages brand communications for a large nonprofit. The Kindest Lie is her first book.

About Waiting for the Night Song:

A startling and timely debut, Julie Carrick Dalton's Waiting for the Night Song is a moving, brilliant novel about friendships forged in childhood magic and ruptured by the high price of secrets that leave you forever changed.

Cadie Kessler has spent decades trying to cover up one truth. One moment. But deep down, didn’t she always know her secret would surface?

An urgent message from her long-estranged best friend Daniela Garcia brings Cadie, now a forestry researcher, back to her childhood home. There, Cadie and Daniela are forced to face a dark secret that ended both their idyllic childhood bond and the magical summer that takes up more space in Cadie’s memory then all her other years combined.

Now grown up, bound by long-held oaths, and faced with truths she does not wish to see, Cadie must decide what she is willing to sacrifice to protect the people and the forest she loves, as drought, foreclosures, and wildfire spark tensions between displaced migrant farm workers and locals.

Waiting for the Night Song is a love song to the natural beauty around us, a call to fight for what we believe in, and a reminder that the truth will always rise.

As a journalist, JULIE CARRICK DALTON has published more than a thousand articles in The Boston Globe, BusinessWeek, The Hollywood Reporter, and other publications. She contributes to DeadDarlings, The Writer Unboxed, and GrubStreet’s writer’s blogs. She also owns and operates a small farm in rural New Hampshire, the backdrop for Waiting for the Night Song, her debut.

Leslie Teel wrote her first YA suspense in third grade because she was jealous of a classmate who had written one first. More recently, she graduated from the Year Six Novel Incubator, where she worked on her second YA suspense novel. Leslie's story "The Featured Guest" was included in the 2017 YA charity anthology 13 Candles: Halloween Tales of Tricks & Transformation. Her other short fiction has appeared in The Blue Lake Review and Amarillo Bay. She currently lives in Watertown, MA with two stripey cats and a non-stripey human. Instagram: @leslie.teel Twitter: @ldorannat

The Kindest Lie: A Novel (Hardcover)

Waiting for the Night Song (Hardcover)

“One of those tales that ties you up, turns you inside-out, wrings you like a wet cloth.” —Jason Reynolds, New York Times bestselling author of Long Way Down