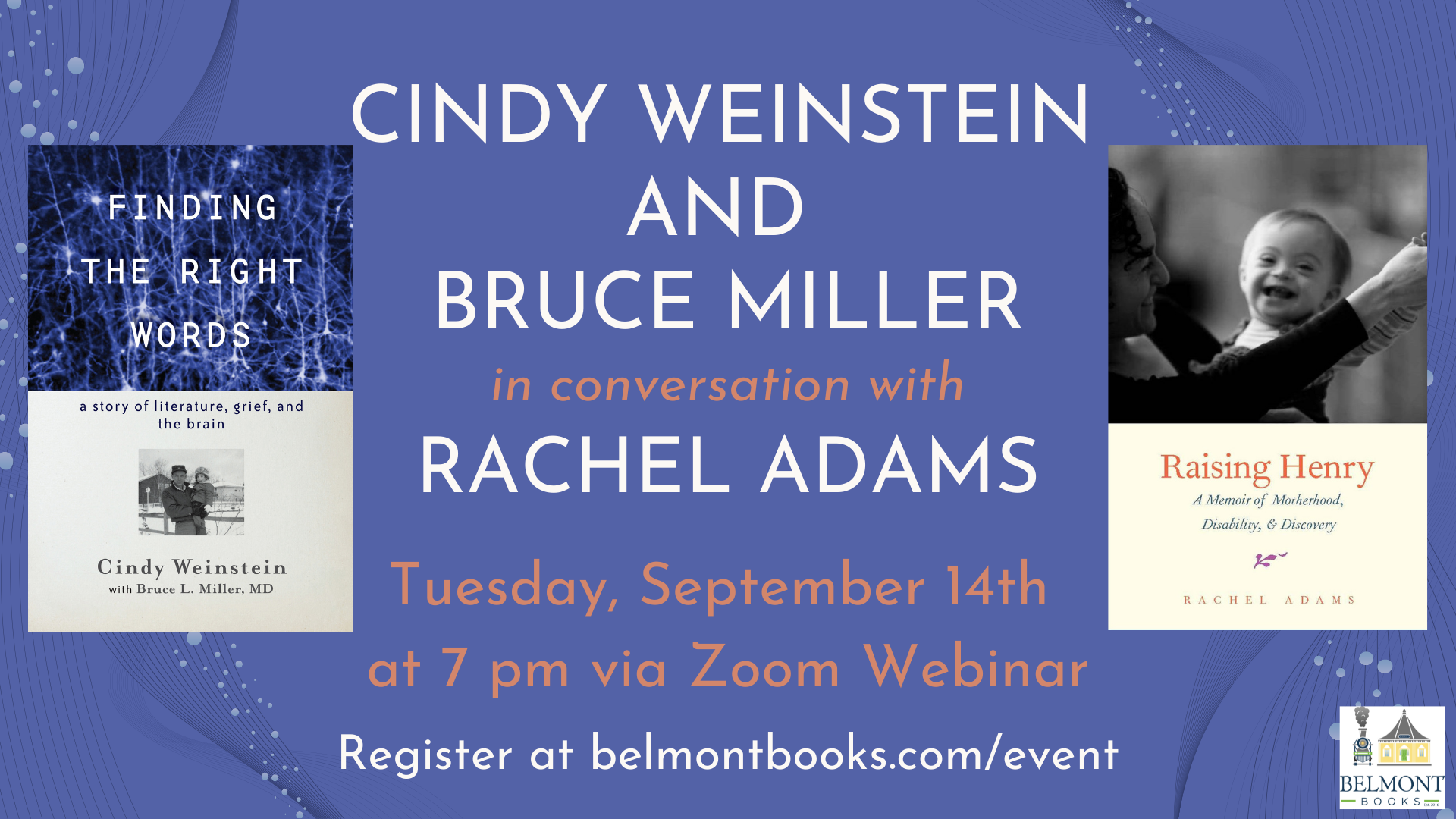 Please join us for a fascinating event with Professor Cindy Weinstein and Dr. Bruce Miller as they discuss their book, Finding the Right Words: A Story of Literature, Grief, and the Brain, with Professor Rachel Adams. Cindy and Bruce's perspectives as caregiver and neurologist, respectively, will provide a fuller understanding of Alzheimer's. Register on Eventbrite!

About Finding the Right Words:

30 years ago, Cindy Weinstein’s father died of early onset Alzheimer’s. She’s been grieving his loss since. As a literary critic and professor, Cindy turned to literature for comfort and always knew she’d write about her father’s illness, but wanted to do so with someone at the cutting edge of science to help caregivers like herself better understand what happens to the person and the brain. Bruce Miller is a neurologist and is the founder of the Memory and Aging Center at the University of California, San Francisco.

Each chapter in FINDING THE RIGHT WORDS is broken into two parts: Cindy’s personal journey, which is a mix of storytelling and metaphor rooted in her deep love of literature and Bruce’s explanations of the neurology behind what she’s described, as well as reflections on his career and the values that have driven his commitment to understanding dementia and listening to families.

Professor Cindy Weinstein  received her B.A. in English and American Literature from Brandeis University, after which she went to UC Berkeley for her Ph.D. in English. She is currently the Eli and Edythe Broad Professor of English, and has been at the California Institute of Technology since 1989, during which time she has published three monographs on American literature, edited several volumes, and taught classes on Herman Melville, Edgar Allan Poe, Women’s Fiction, and African-American literature. She has had several administrative roles at Caltech, including Vice Provost and Chief Diversity Officer. In 2018-19, she was an Atlantic Fellow in the Global Brain Health Institute based at UCSF and Trinity College Dublin, where she studied neurology with an interdisciplinary group of scientists, artists, social scientists, and physicians. During this time, she worked with Dr. Bruce Miller on Finding the Right Words.

Dr. Bruce Miller holds the A.W. and Mary Margaret Clausen Distinguished Professorship in Neurology at the University of California, San Francisco where he directs the Memory and Aging Center. He is the principal investigator of the NIH-sponsored Alzheimer’s Disease Research Center and program project on frontotemporal dementia, and he is a member of the National Academy of Medicine. As a behavioral neurologist whose work emphasizes brain-behavior relationships, he has reported on the emergence of artistic ability, personality, cognition, and emotion with the onset of neurodegenerative disease. Some of these findings have improved diagnostic accuracy, while others are leading to a deeper understanding of brain functional anatomy and disease risk. In 2015, partly in response to research findings showing that 30 to 40% of dementia cases could be eliminated with lifestyle changes, he helped found the Global Brain Health Institute and the Atlantic Fellows for Equity in Brain Health program, which he now co-directs.

Rachel Adams is a Professor of English and Comparative Literature and Provost's Senior Faculty Teaching Scholar at Columbia University.  Professor Adams specializes in 20th- and 21st-century literatures of the United States and the Americas, disability studies and health humanities, media studies, theories of race, gender, and sexuality, and food studies.  Her most recent book is Raising Henry:  A Memoir of Motherhood, Disability, and Discovery, published by Yale University Press in 2013 and winner of the 2014 Delta Kappa Gamma Educators' Award.  She is also the author of Continental Divides:  Remapping the Cultures of North America (University of Chicago Press, 2009) and Sideshow U.S.A.: Freaks and the American Cultural Imagination (University of Chicago Press, 2001).

Finding the Right Words: A Story of Literature, Grief, and the Brain (Hardcover)

The moving story of an English professor studying neurology in order to understand and come to terms with her father's death from Alzheimer's.

Raising Henry: A Memoir of Motherhood, Disability, and Discovery (Paperback)

Rachel Adams’s life had always gone according to plan. She had an adoring husband, a beautiful two-year-old son, a sunny Manhattan apartment, and a position as a tenured professor at Columbia University.