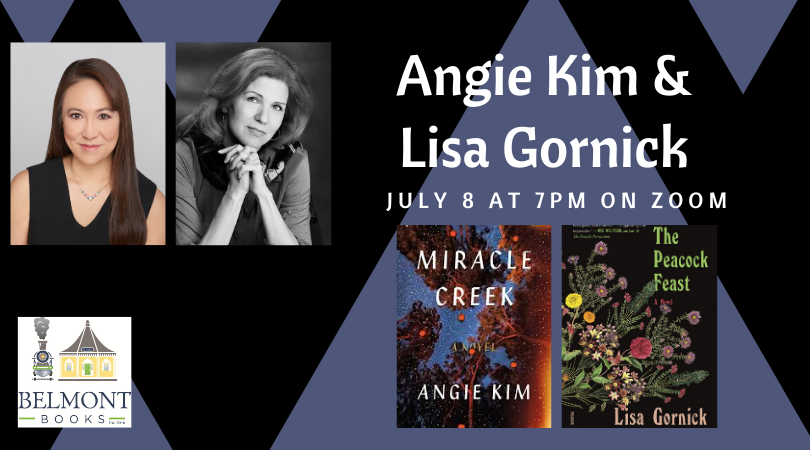 Please join us for a dual event with authors Angie Kim and Lisa Gornick. This is sure to be a fascinating conversation, taking place on Zoom. Register here. Please note the new date of Wednesday, July 8th.

The “gripping… page-turner” (Time) hitting all the best of summer reading lists, Miracle Creek is perfect for book clubs and fans of Liane Moriarty and Celeste Ng.

How far will you go to protect your family? Will you keep their secrets? Ignore their lies?

In a small town in Virginia, a group of people know each other because they’re part of a special treatment center, a hyperbaric chamber that may cure a range of conditions from infertility to autism. But then the chamber explodes, two people die, and it’s clear the explosion wasn’t an accident.

A powerful showdown unfolds as the story moves across characters who are all maybe keeping secrets, hiding betrayals. Chapter by chapter, we shift alliances and gather evidence: Was it the careless mother of a patient? Was it the owners, hoping to cash in on a big insurance payment and send their daughter to college? Could it have been a protester, trying to prove the treatment isn’t safe?

“A stunning debut about parents, children and the unwavering hope of a better life, even when all hope seems lost" (Washington Post), Miracle Creek uncovers the worst prejudice and best intentions, tense rivalries and the challenges of parenting a child with special needs. It’s “a quick-paced murder mystery that plumbs the power and perils of community” (O Magazine) as it carefully pieces together the tense atmosphere of a courtroom drama and the complexities of life as an immigrant family. Drawing on the author’s own experiences as a Korean-American, former trial lawyer, and mother of a “miracle submarine” patient, this is a novel steeped in suspense and igniting discussion. Recommended by Erin Morgenstern, Jean Kwok, Jennifer Weiner, Scott Turow, Laura Lippman, and more-- Miracle Creek is a brave, moving debut from an unforgettable new voice.

Angie Kim moved as a preteen from Seoul, South Korea to the suburbs of Baltimore. She attended Stanford University and Harvard Law School, where she was an editor of the Harvard Law Review, then practiced as a trial lawyer at Williams & Connolly. Her stories have won the Glamour Essay Contest and the Wabash Prize for Fiction, and appeared in numerous publications including The New York Times, Salon, Slate, The Southern Review, Sycamore Review, Asian American Literary Review, and PANK. Kim lives in Northern Virginia with her husband and three sons. Miracle Creek is Kim's debut novel.

About The Peacock Feast:

From “one of the most perceptive, compassionate writers of fiction in America...immensely talented and brave” (Michael Schaub, NPR), a historical saga about love, class, and the past we never escape.

The Peacock Feast opens on a June day in 1916 when Louis C. Tiffany, the eccentric glass genius, dynamites the breakwater at Laurelton Hall—his fantastical Oyster Bay mansion, with columns capped by brilliant ceramic blossoms and a smokestack hidden in a blue-banded minaret—so as to foil the town from reclaiming the beach for public use. The explosion shakes both the apple crate where Prudence, the daughter of Tiffany’s prized gardener, is sleeping and the rocks where Randall, her seven-year-old brother, is playing.

Nearly a century later, Prudence receives an unexpected visit at her New York apartment from Grace, a hospice nurse and the granddaughter of Randall, who Prudence never saw again after he left at age fourteen for California. The mementos Grace carries from her grandfather’s house stir Prudence’s long-repressed memories and bring her to a new understanding of the choices she made in work and love, and what she faces now in her final days.

Spanning the twentieth century and three continents, The Peacock Feast ricochets from Manhattan to San Francisco, from the decadent mansions of the Tiffany family to the death row of a Texas prison, and from the London consultation room of Anna Freud to a Mendocino commune. With psychological acuity and aching eloquence, Lisa Gornick has written a sweeping family drama, an exploration of the meaning of art and the art of dying, and an illuminating portrait of how our decisions reverberate across time and space.

Lisa Gornick is the author of Louisa Meets Bear, Tinderbox, and A Private Sorcery. Her stories and essays have appeared widely, including in The New York Times, The Paris Review, Prairie Schooner, Real Simple, and The Wall Street Journal. She holds a B.A. from Princeton and a Ph.D. in clinical psychology from Yale, and is on the faculty of the Columbia University Center for Psychoanalytic Training and Research. A long-time New Yorker, she lives in Manhattan with her family.

WINNER OF THE EDGAR AWARD FOR BEST FIRST NOVEL

The “gripping… page-turner” (Time) hitting all the best of summer reading lists, Miracle Creek is perfect for book clubs and fans of Liane Moriarty and Celeste Ng

How far will you go to protect your family? Will you keep their secrets? Ignore their lies?

The Peacock Feast: A Novel (Paperback)

From “one of the most perceptive, compassionate writers of fiction in America...immensely talented and brave” (Michael Schaub, NPR), a historical saga about love, class, and the past we never escape.