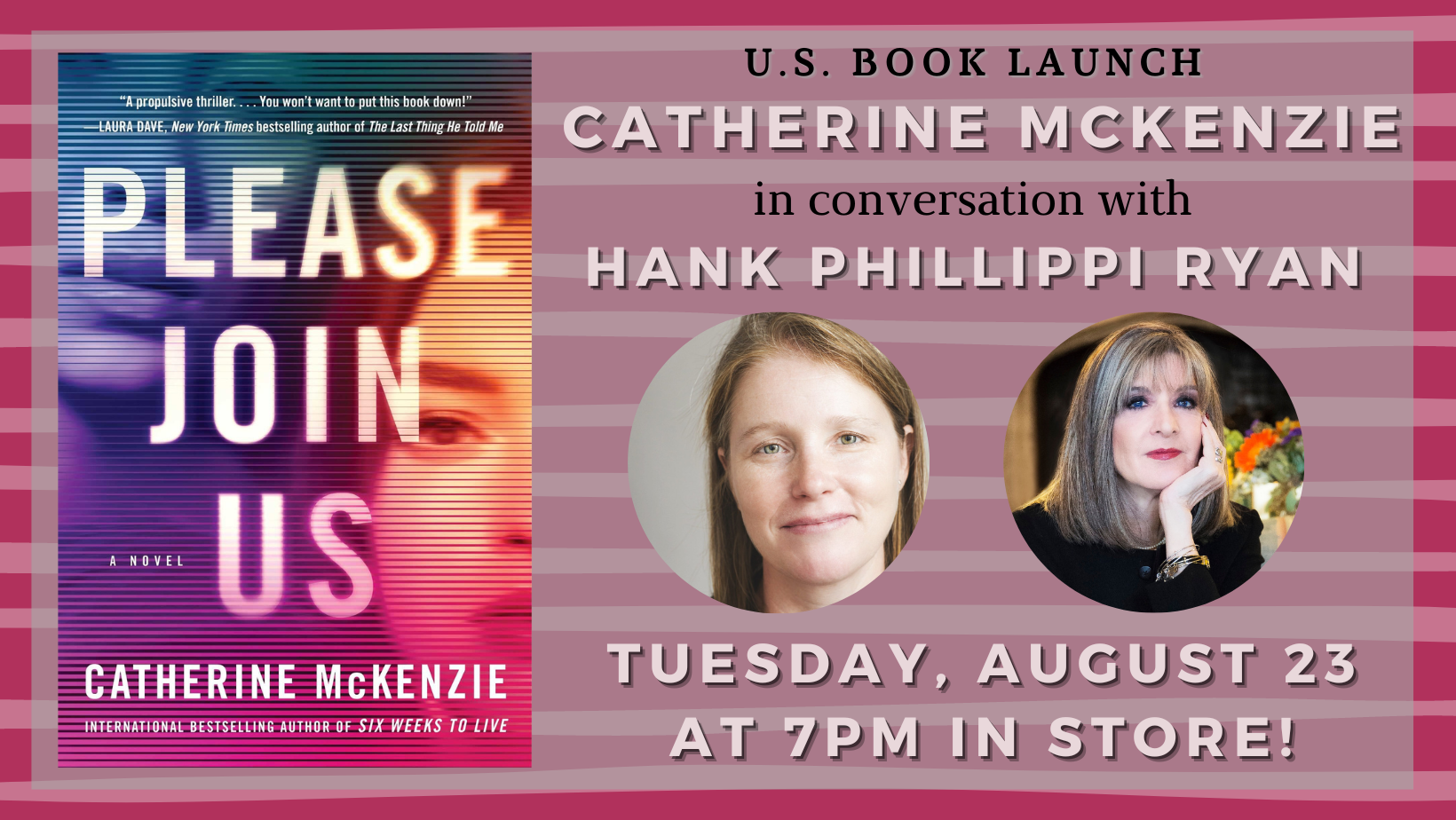 Join us in-store for the U.S. book launch of PLEASE JOIN US! Author Catherine McKenzie will be in conversation with Hank Phillippi Ryan.

*Masks are required for attendees.*

About Please Join Us:

Named one of 2022’s best and most-anticipated thrillers by Goodreads, CrimeReads, Motherly, Westport Magazine, and more!

A “propulsive thriller about secret organizations, hidden agendas, and the lengths one woman will go to reclaim her life” (Laura Dave, author of Reese’s Book Club Pick The Last Thing He Told Me) from USA TODAY bestselling author Catherine McKenzie.

At thirty-nine, Nicole Mueller’s life is on the rocks. Her once brilliant law career is falling apart. She and her husband, Dan, are soon to be forced out of the apartment they love. After a warning from her firm’s senior partners, she receives an invitation from an exclusive women’s networking group, Panthera Leo. Membership is anonymous, but every member is a successful professional. It sounds like the perfect solution to help Nicole revive her career. So, despite Dan’s concerns that the group might be a cult, Nicole signs up for their retreat in Colorado.

Once there, she meets the other women who will make up her Pride. A CEO, an actress, a finance whiz, a congresswoman: Nicole can’t believe her luck. The founders of Panthera Leo are equally as impressive. They explain the group’s core philosophy: they’re a girl’s club in a boy’s club world.

Nicole is all in. And when she gets home, she soon sees dividends. Her new network quickly provides her with clients that help her relaunch her career, and a great new apartment too. The favors she has to provide in return seem benign. But then she’s called to the congresswoman’s apartment late at night where she’s pressed into helping her cover up a crime. And suddenly, Dan’s concerns that something more sinister is at play seem all too relevant. Can Nicole extricate herself from the group before it’s too late? Or will joining Panthera Leo be the biggest mistake of her life?

Catherine McKenzie was born and raised in Montreal, Canada. A graduate of McGill University in history and law, Catherine practiced law for twenty years before leaving to write full time. An avid runner, skier, and tennis player, she’s the author of numerous bestsellers including I’ll Never Tell and The Good Liar. Her works have been translated into multiple languages and Please Join Us, I’ll Never Tell, and You Can’t Catch Me have all been optioned for development into television series. Visit her at CatherineMcKenzie.com or follow her on Twitter @CEMcKenzie1 or Instagram @CatherineMcKenzieAuthor.

HANK PHILLIPPI RYAN is the USA Today bestselling author of 13 psychological thrillers, winning the genre's most prestigious awards: five Agathas, four Anthonys, and the coveted Mary Higgins Clark Award. She is also the investigative reporter for Boston's WHDH-TV, winning 37 EMMYs. Book reviewers call her “a master of suspense.” Her newest is HER PERFECT LIFE, a chilling psychological standalone about fame, family, and revenge. It received starred reviews from both Kirkus and Publishers Weekly, calling it “a superlative thriller.” It’s now nominated for the Agatha Award for Best Contemporary Novel. Her next is THE HOUSE GUEST, coming February 2023.

Please Join Us: A Novel (Hardcover)

Named one of 2022’s best and most-anticipated thrillers by Goodreads, CrimeReads, Motherly, Westport Magazine, and more!

A “propulsive thriller about secret organizations, hidden agendas, and the lengths one woman will go to reclaim her life” (Laura Dave, author of Reese’s Book Club Pick The Last Thing He Told Me)