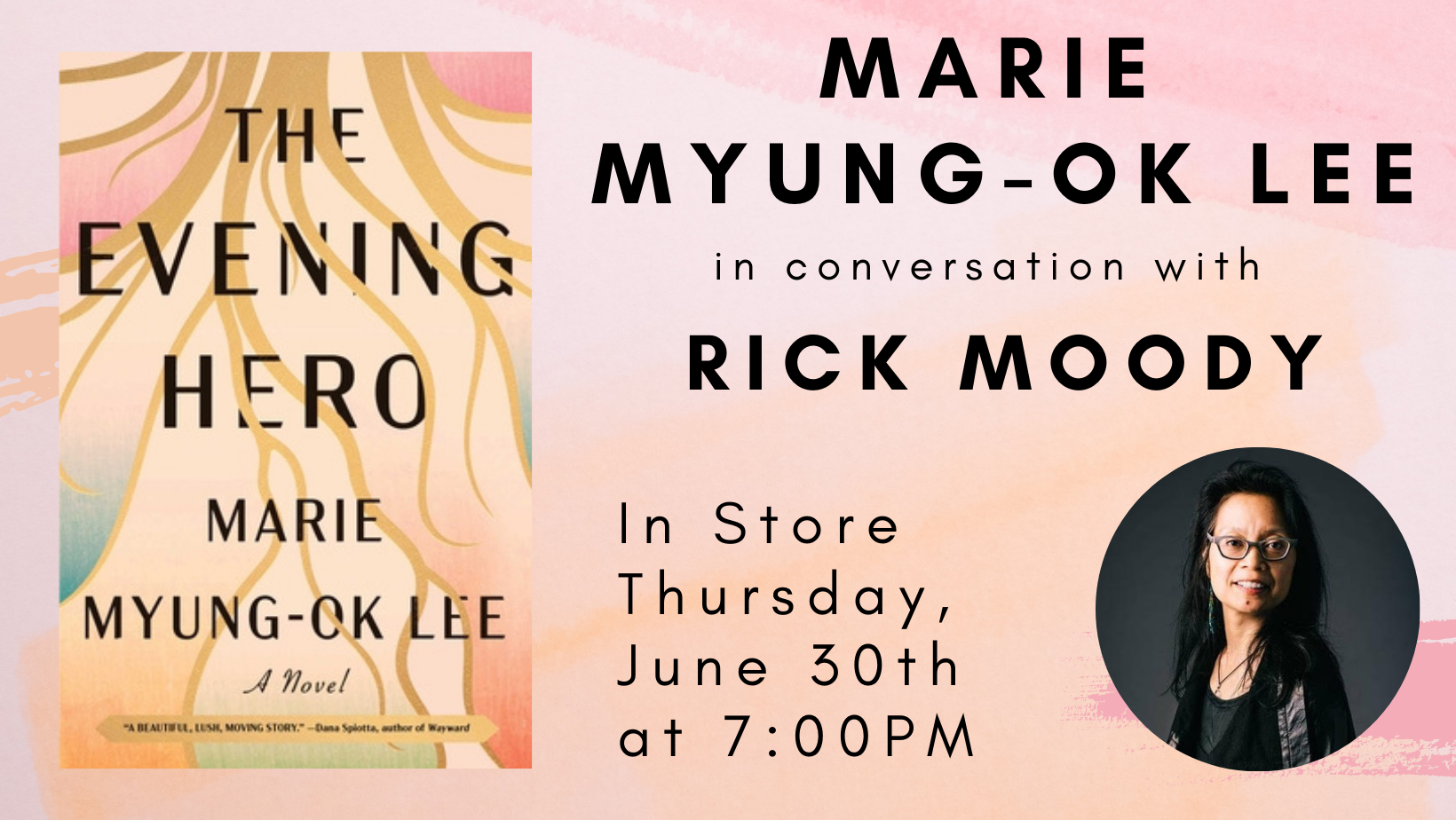 Join Marie Myung-Ok Lee as she discusses her latest release, THE EVENING HERO, with Rick Moody! The event will be held in-store and is free to attend.

*Masks are required for this event.*

About The Evening Hero:

A sweeping, lyrical novel following a Korean immigrant pursuing the American dream who must confront the secrets of the past or risk watching the world he’s worked so hard to build come crumbling down.

Dr. Yungman Kwak is in the twilight of his life. Every day for the last fifty years, he has brushed his teeth, slipped on his shoes, and headed to Horse Breath’s General Hospital, where, as an obstetrician, he treats the women and babies of the small rural Minnesota town he chose to call home.

This was the life he longed for. The so-called American dream. He immigrated from Korea after the Korean War, forced to leave his family, ancestors, village, and all that he knew behind. But his life is built on a lie. And one day, a letter arrives that threatens to expose it.

Yungman’s life is thrown into chaos—the hospital abruptly closes, his wife refuses to spend time with him, and his son is busy investing in a struggling health start-up. Yungman faces a choice—he must choose to hide his secret from his family and friends or confess and potentially lose all he’s built. He begins to question the very assumptions on which his life is built—the so-called American dream, with the abject failure of its healthcare system, patient and neighbors who perpetuate racism, a town flawed with infrastructure, and a history that doesn’t see him in it.

Toggling between the past and the present, Korea and America, Evening Hero is a sweeping, moving, darkly comic novel about a man looking back at his life and asking big questions about what is lost and what is gained when immigrants leave home for new shores.

Marie Myung-Ok Lee is an acclaimed Korean American writer and author of the young adult novel Finding my Voice, thought to be one of the first contemporary-set Asian American YA novels. She is one of a handful of American journalists who have been granted a visa to North Korea since the Korean War. She was the first Fulbright Scholar to Korea in creative writing and has received many honors for her work, including an O. Henry honorable mention, the Best Book Award from the Friends of American Writers, and a New York Foundation for the Arts fiction fellowship. Her stories and essays have been published in The Atlantic, The New York Times, Slate, Salon, Guernica, The Paris Review, The Nation, and The Guardian, among others. Marie is a founder of the Asian American Writers’ Workshop and teaches creative writing at Columbia. She lives in New York City with her family.

Rick Moody is the author of the award-winning memoir The Black Veil, the novels Hotels of North America, The Four Fingers of Death, The Diviners, Purple America, The Ice Storm, Garden State, and multiple collections of short fiction. Moody is the recipient of a Guggenheim Fellowship, and his work has been anthologized in Best American Stories, Best American Essays, and the Pushcart Prize anthology. He lives in Rhode Island.

A sweeping, lyrical novel following a Korean immigrant pursuing the American dream who must confront the secrets of the past or risk watching the world he’s worked so hard to build come crumbling down.

Dr. Yungman Kwak is in the twilight of his life.

The Ice Storm: A Novel (Paperback)

The year is 1973. As a freak winter storm bears down on an exclusive, affluent suburb in Connecticut, cark skid out of control, men and women swap partners, and their children experiment with sex, drugs, and even suicide.