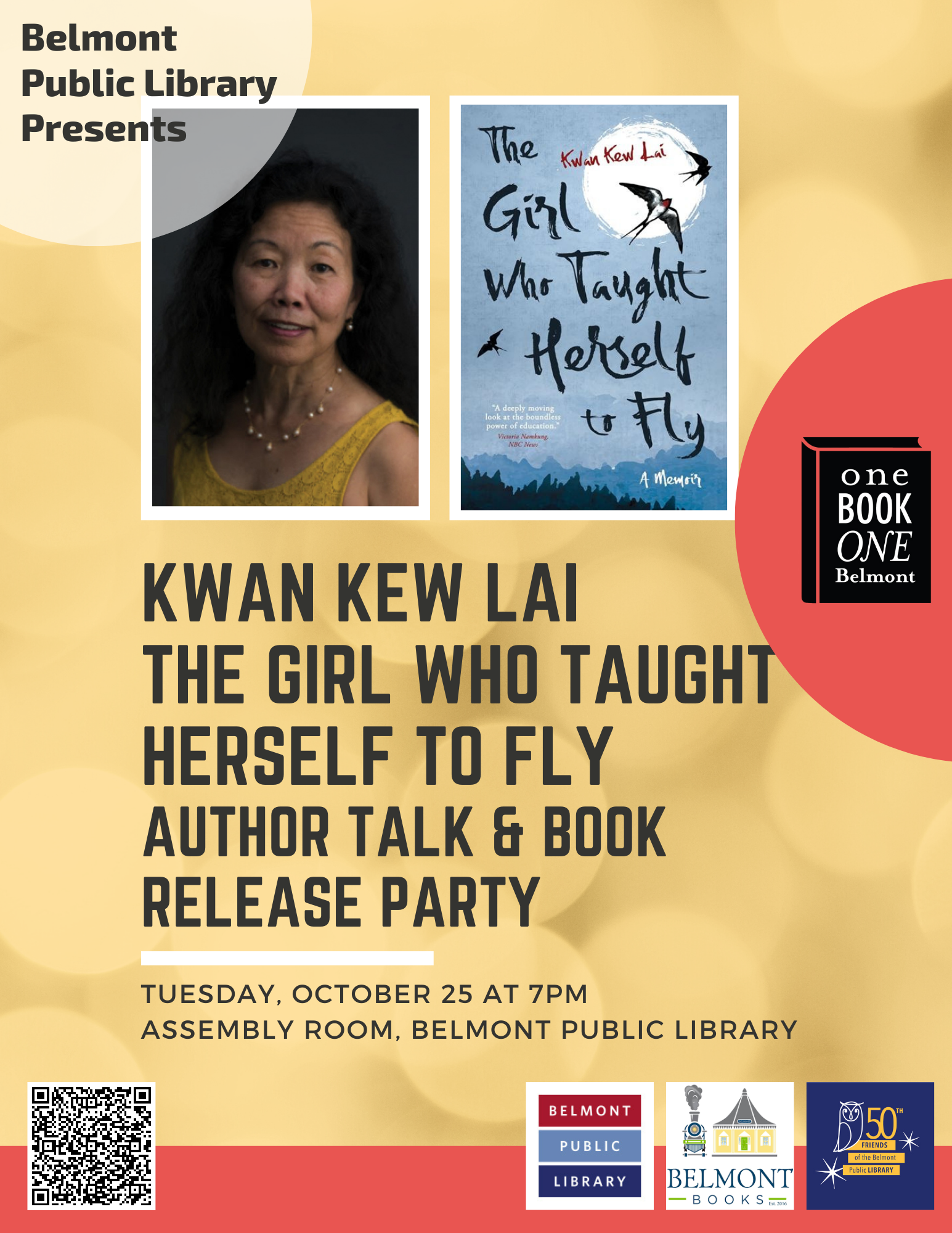 Join author Kwan Kew Lai at the Belmont Public Library in the Assembly Room for her release of her memoir THE GIRL WHO TAUGHT HERSELF TO FLY! Don't miss the rest of the library's One Book One Belmont programming in October!

About The Girl Who Taught Herself to Fly:

Kwan Kew Lai met her first Punjabi woman doctor while lying in a hospital bed with a severe kidney infection at the age of fourteen. Watching the woman walk away down the hall, Kwan Kew was convinced she could, and would, carve out her own destiny.

In the British Straits Settlement of Penang Island, she was born into an impoverished Chinese family of two boys and ten girls on the cusp of the Japanese occupation during World War Two. She did not wish to repeat the life of her uneducated mother, burdened with an endless brood, nor tolerate the fact that her father considered girls useless since they could not carry on their family name.

The newly independent country of Malaya developed a national policy favoring one racial group, the Bumiputras, vastly diminishing her chance of receiving a university scholarship. Her fortuitous introduction to a free library and her determination to continue her education, led to the opportunity of a lifetime: a scholarship from Wellesley College.

When her father saw her off at the Penang International Airport as the first child to attend college, she proved herself to him, but more importantly she started the journey of a lifetime fulfilling dreams that originated as a young girl playing in the mud with the chickens.

In The Girl Who Taught Herself to Fly, the author weaves in her family's story of joy, sorrow, loss, love, and endless struggles with poverty and hunger. This poignant memoir, with universal and timeless themes, will leave you in awe.

Originally from Penang, Malaysia, Kwan Kew Lai came to the United States after receiving a full scholarship to attend Wellesley. “Without that open door I would not have gone on to become a doctor,” Lai wrote in her Doctors Without Borders bio.

In 2006, after volunteering in the Indian Ocean earthquake and tsunami, Lai left her position as a Professor of Medicine at the University of Massachusetts Medical School and worked part-time as a clinician, while dedicating her time to humanitarian work. Lai volunteered in the HIV/AIDS epidemic in Vietnam, Tanzania, Uganda, South Africa, Nigeria, Malawi and provided earthquake relief in Haiti, Nepal, drought and famine relief at the Kenyan and Somalian border, hurricane relief in the Philippines, Puerto Rico, the Bahamas, and the gulf coasts. She worked with refugees of the Democratic Republic of Congo, South Sudan, Syria in Moria camp of Lesvos in Greece, and the Rohingya in Cox’s Bazar, Bangladesh, in war-torn Libya and Yemen. She treated Ebola patients in Liberia and Sierra Leone. During the peak of the COVID pandemic, she volunteered at Elmhurst Hospital in Queens, New York and on St. Croix of the US Virgin Islands.

Into Africa, Out of Academia: A Doctor's Memoir is about her experiences in Africa. Her book debut, Lest We Forget: A Doctor’s Experience with Life and Death During the Ebola Outbreak was published in 2018. Lai is a resident of Belmont.

The Girl Who Taught Herself to Fly (Paperback)

Kwan Kew Lai met her first Punjabi woman doctor while lying in a hospital bed with a severe kidney infection at the age of fourteen. Watching the woman walk away down the hall, Kwan Kew was convinced she could, and would, carve out her own destiny.