Sandra A. Miller and Maureen Stanton 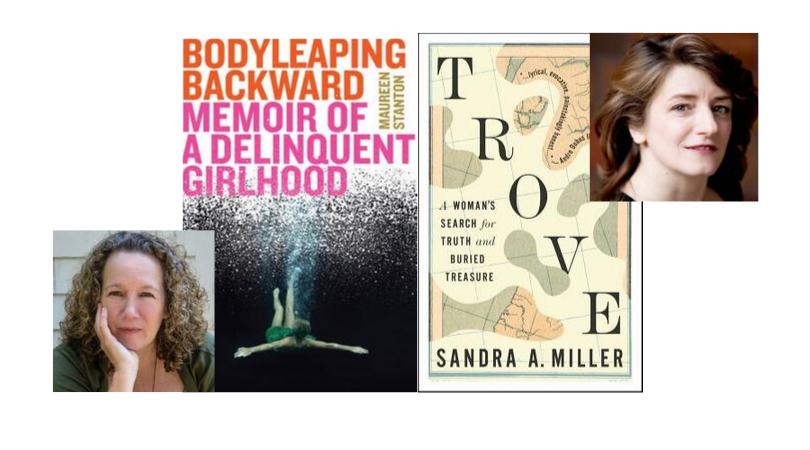 Trove is the story of a woman whose life is up-ended when she begins an armchair treasure hunt--a search for $10,000 worth of gold coins buried in New York City, of all places--with a man who, as she points out, is not her husband. In this eloquent, hilarious, sharply realized memoir, Sandra A. Miller grapples with the regret and confusion that so often accompanies middle age, and the shame of craving something more when she has so much already. In a very real way, Miller has spent her life hunting for buried treasure. As a child, she trained herself to find things: dropped hair clips, shiny bits of broken glass, discarded lighters. Looking to escape from her volatile parents and often-unhappy childhood, Miller found deeper meaning, and a good deal of hope, in each of these objects. Now an adult and facing the loss of her last living parent--her mother who is at once cold, difficult, and wildly funny--Miller finds herself, as she so often did as a little girl, pressed against a wall of her own longing. Her search for gold, which soon becomes an obsession, forces her to dredge up painful pieces of her past, confront the true source of her sorrow, and finally discover what it is she has been looking for all these years.

Sandra A. Miller’s essays and articles have appeared in over one-hundred publications, including The Christian Science Monitor, Spirituality & Health, Modern Bride, Yankee, Family Fun, and The Boston Globe Magazine, for which she is a regular correspondent.

One of her essays was turned into a short film called “Wait,” directed by Trudie Styler and starring Kerry Washington. Sandra appeared on The Today Show with Ms. Styler to promote the film which was part of a Glamour Magazine project. She also wrote award-winning scripts for 11 Central Ave., a radio comic strip that ran for three years in major public radio markets.

Sandra has lived and worked across the country and around the world, including New York, Los Angeles, Tokyo, and Luxembourg. She currently teaches English at the University of Massachusetts, Lowell and lives outside of Boston with her husband, Mark Santello, and their two children.

For Maureen Stanton’s proper Catholic mother, the town’s maximum security prison was a way to keep her seven children in line (“If you don’t behave, I’ll put you in Walpole Prison!").  But as the 1970s brought upheaval to America, and the lines between good and bad blurred, Stanton’s once-solid family lost its way. A promising young girl with a smart mouth, Stanton turns watchful as her parents separate and her now-single mother descends into shoplifting, then grand larceny, anything to keep a toehold in the middle class for her children. No longer scared by threats of Walpole Prison, Stanton too slips into delinquency—vandalism, breaking and entering—all while nearly erasing herself through addiction to angel dust, a homemade form of PCP that swept through her hometown in the wake of Nixon’s “total war” on drugs.

Body Leaping Backward is the haunting and beautifully drawn story of a self-destructive girlhood, of a town and a nation overwhelmed in a time of change, and of how life-altering a glimpse of a world bigger than the one we come from can be.

MAUREEN STANTON, the author of Killer Stuff and Tons of Money, has been awarded the Iowa Review prize, a Pushcart Prize, the American Literary Review award in nonfiction, and fellowships from the National Endowment for the Arts. Stanton teaches at UMass Lowell.

Trove: A Woman's Search for Truth and Buried Treasure (Paperback)

A stirring memoir that beautifully and humorously captures the pain of unresolved loss." -- Kirkus Reviews