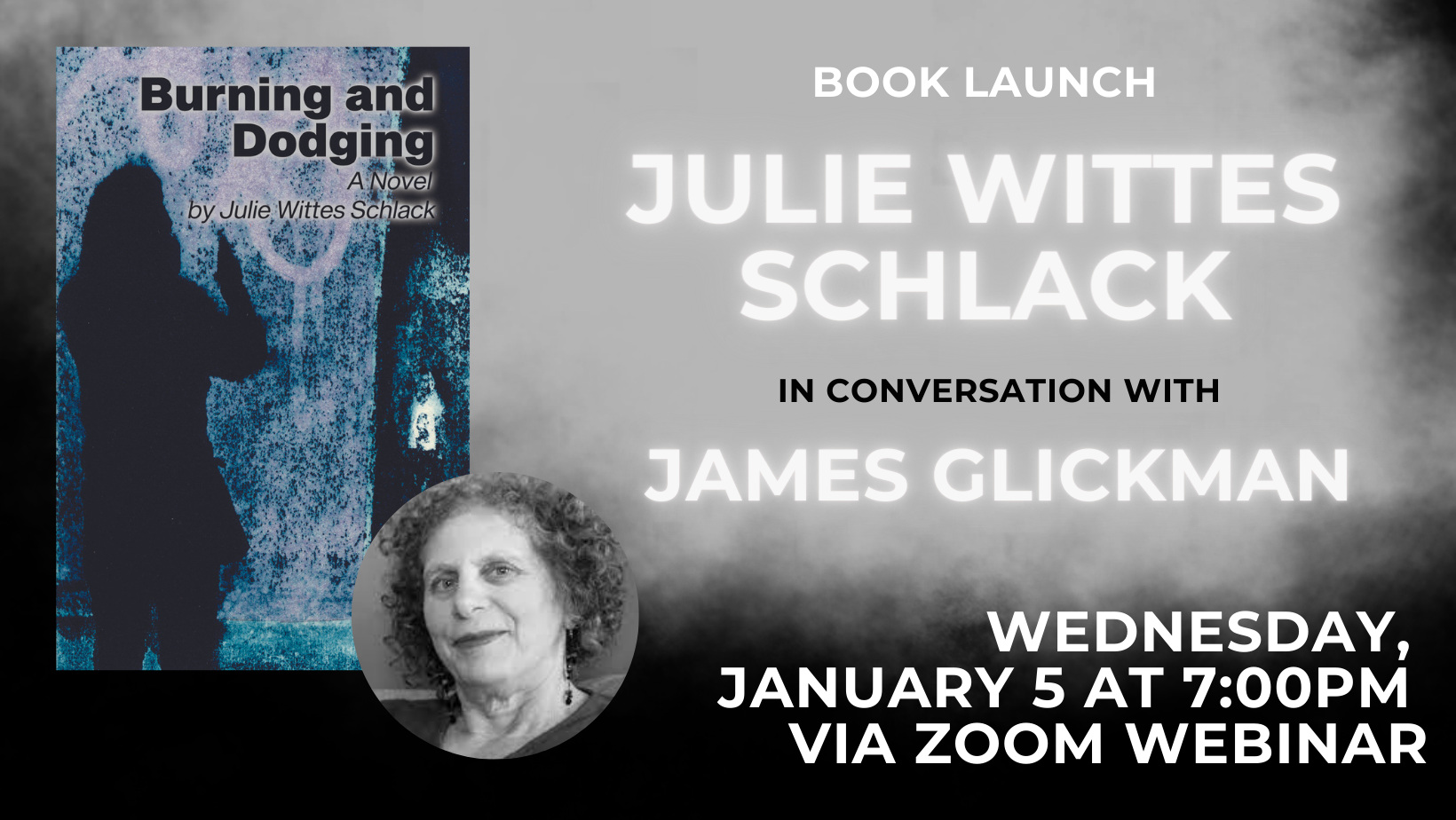 Please join us for the launch of Julie Schlack's new book, Burning and Dodging, which she will be discussing with author James Glickman!  Register for this Zoom webinar here.

About Burning and Dodging:

"An astute and absorbing study of personal growth, human connection, and the nature of reality." -Kirkus Reviews

On the cusp of sixty, after a lifetime of supporting the aspirations of others, would-be artist Tina Gabler is feeling a sense of urgency to take her own ambitions seriously and put her creative talents to the test. Temporarily unattached, Tina takes a position with former prime-time news anchor, Peter Bright at his home in the Thousand Islands. Aging and frail, Peter is trying to finish a book about the decline of objectivity in photojournalism-a meticulously documented expos of iconic but staged photographs that defined "reality" for an increasingly lazy and credulous public that, Peter believes, demands stories more than facts.

As Peter's research assistant, Tina tracks down not just the provenance of his photos, but also the unidentified child in a Roman Vishniac photograph and Peter's estranged daughter, a Cree girl he adopted during the notorious "Sixties Scoop" in Canada. But in trying to create happy endings for other people's children, she must reexamine her relationship with her own father, and the quest for collective versus personal achievement that has brought her to this unsettled moment.

Funny, searching, and gorgeously written, Burning and Dodging entertains as it reveals how the stories we construct about others support the stories we tell about ourselves.

Julie Wittes Schlack writes and teaches both fiction and creative nonfiction. Her cultural memoir, This All-at-Onceness, was named by Kirkus Reviews as one of the best Indie Nonfiction Books of 2019, and her novel, Burning and Dodging, was just released in late December of 2021.  Her essays and stories have appeared in numerous literary journals, including Pangyrus, Shenandoah, The Writer’s Chronicle, Ninth Letter, Eleven Eleven, and The Tampa Review. She received a Hopwood Award for Fiction, and her essays have been finalists for the Annie Dillard Nonfiction Award and the Clarissa Dalloway Nonfiction Award. She is a regular contributor to NPR station WBUR’s journal of ideas and opinions, Cognoscenti. You can read some of Julie’s work at www.juliewittesschlack.com.

Based closely on the known historical record, Crossing Point brings to life the American Revolution in all of its bloody detail.

When the Revolutionary War begins, Guy Watson is a slave to the Hazzard family in Rhode Island, but he is soon engaged in service for the American army by Samuel Ward, head of one New England's most prominent families. Torn about leaving his beloved June and the other slaves that have become his family, Guy eventually sets out with Samuel Ward and a battalion of men on a treacherous, and legendary, trek to Quebec.

The two men experience the inevitable toll the brutality of war takes, and it changes them forever. Upon their eventual return home, they come to realize the cost of war not just for those in battle, but also for those who stayed. Crossing Point vividly shares a little-known chapter in the national founding, and raises the question of what justice was fought for by the men who faced an uncertain freedom when the last shots were fired.

James Glickman is a graduate of Yale University and the Iowa Writers' Workshop. His fiction and nonfiction writings appeared in The Boston Globe, Redbook, Ladies Home Journal, Berfrois, and many others. His first novel Sounding the Waters came out in 1996 to wide acclaim. Crossing Point is his second novel. He lives in Massachusetts.

"An astute and absorbing study of personal growth, human connection, and the nature of reality." -Kirkus Reviews

Based closely on the known historical record, Crossing Point brings to life the American Revolution in all of its bloody detail.