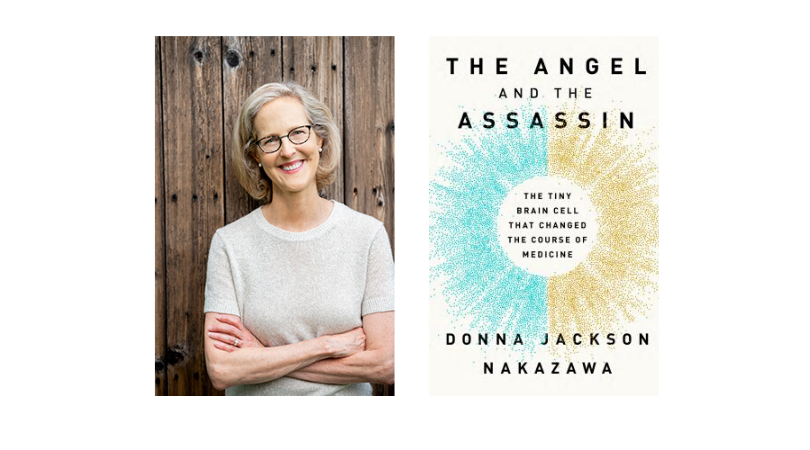 Join us for the launch of Donna Jackson Nakazawa's The Angel and the Assassin.

A thrilling story of scientific detective work and medical potential that illuminates the newly understood role of microglia—an elusive type of brain cell that is vitally relevant to our everyday lives.

“The rarest of books: a combination of page-turning discovery and remarkably readable science journalism.”—Mark Hyman, MD, #1 New York Times bestselling author of Food: What the Heck Should I Eat?

Until recently, microglia were thought to be merely the brain’s housekeepers, helpfully removing damaged cells. But a recent groundbreaking discovery revealed them to be capable of terrifying Jekyll and Hyde behavior. When triggered—and anything that stirs up the immune system in the body can activate microglia—they can morph into destroyers, impacting a wide range of issues from memory problems and anxiety to depression and Alzheimer’s. Under the right circumstances, however, microglia can be coaxed back into being angelic healers, able to repair the brain in ways that help alleviate symptoms and hold the promise to one day prevent disease.

A fascinating behind-the-scenes account of this cutting-edge science, The Angel and the Assassin also explores the medical implications of these game-changing discoveries. Award-winning journalist Donna Jackson Nakazawa began her investigation with a personal interest—when diagnosed with an autoimmune disorder years ago, she was convinced there was something physical going on in her brain as well as her body, though no doctor she consulted could explain how the two could be interacting in this way. With the compassion born of her own experience, she follows practitioners and patients on the front lines of treatments that help to “reboot” microglia—from neurofeedback and intermittent fasting to transcranial magnetic stimulation and gamma light flicker therapy. She witnesses patients finding significant relief from pressing symptoms—and at least one stunning recovery—offering new hope to the tens of millions who suffer from mental, cognitive, and physical health issues.

Proving once and for all the biological basis for the mind-body connection, the discovery of the true role of microglia stands to rewrite psychiatric and medical texts as we know them. Hailed as “riveting,” “stunning,” and “visionary,” The Angel and the Assassin offers us a radically reconceived picture of human health and promises to change everything we thought we knew about how to heal ourselves.

Donna Jackson Nakazawa is the author of three previous books exploring the intersection of neuroscience, immunology, and emotion: Childhood Disrupted, which was a finalist for the 2016 Books for a Better Life award, The Last Best Cure, and The Autoimmune Epidemic. For her written contributions to the field of immunity, she has received the AESKU award and the National Health Information Award, which recognizes the nation’s best magazine articles on health. Jackson Nakazawa has appeared on Today, NPR, NBC News, and ABC News, and her work has appeared in The Washington Post, Health Affairs, Aeon, More, Parenting, AARP Magazine, and Glamour, and has been featured on the cover of Parade as well as in Time and USA Today. She blogs for Psychology Today and HuffPost. Jackson Nakazawa has been the recipient of writing-in-residence fellowships from the Virginia Center for the Creative Arts, Yaddo, and the MacDowell Colony. She lives with her family in Maryland.

The Angel and the Assassin: The Tiny Brain Cell That Changed the Course of Medicine (Hardcover)

A thrilling story of scientific detective work and medical potential that illuminates the newly understood role of microglia—an elusive type of brain cell that is vitally relevant to our everyday lives.