The Treasure of Mad Doc Magee - If you like adventures, read this book! In this story, Jenny and Pandora, her smart partner, look for a gold nugget that Mad Doc Magee hid! But, there are obstacles and tricks along the way. If Jenny doesn’t find the gold, her family won’t have enough money to stay in Eden. Will the skeleton map they take from Mad Doc Magee’s office help them find the gold? I enjoyed this magnificent book because they had to use decoding skills and math to find the gold. — Azari, age 9

Mr. Wolf's Class - This is a fun comic book about a school day, and the characters are all animals! I’m not sure who my favorite character was because they were all funny.  My favorite part was the hilarious ending. The illustrations are cartoony, and I like them.          — Ruku, age 8

The Lost Books: The Scroll of Kings - I loved this book! It is about a boy named Alex who wants to be a librarian. He pretends to be the royal librarian and finds out that books are alive and some are even dangerous. He has to find the lost books that are special. It is exciting and interesting and has some magic. It is a little scary when the books attack the librarian but not too much. I hope there will be another book in the series. My mom read it too and she loved it! — Will, age 7

Positively Izzy was okay, but very confusing. It seems to tell the story of two girls who are preparing for a talent show. One of the girls, Izzy, is really excited to be in the show, and the other one, Brianna, does it because her drama teacher mother asks her to. I enjoyed the book but the very end was confusing. — Ellie, age 11

The Phantom Tower - I loved this book. I liked how every one to two o'clock the phantom tower appears in the kids' building, and that there's a princess living in their building. I really liked Tamika, she was the only girl in the book other than the princess. When the two boys, Mal and Colm, found the phantom tower, they didn't really want to investigate, so Tamika told them if they did, she would go with them. On a scale of 1 to 10, I'd give it a 9.1 - similar to how I'd score the Girls Who Rocked the World books. — Maddie, age 9

The book The Jigsaw Jungle was such a good story! I couldn’t put the book down. I really liked this book because you think something is going to happen, but then the entire story plot turns around! In this book, Claudia’s dad disappears, and she is super scared. But one day her dad sends her a puzzle piece and….. and….. If you want to find out what happens next you are going to have to read the book! Ten stars out of ten. — Tess, age 11 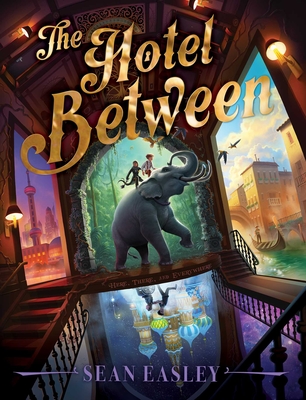 The Hotel Between is a great book! It starts off kind of slow but once things start getting exciting, they stay exciting. The Hotel Between is about a boy named Cameron who leaves his home and winds his way into the Hotel Between in search of his father. Cameron must find his way out of the confusing and magical hotel before it’s too late! In this book, everything happens quickly so you need to keep up! This book also combines friendship, loyalty, and action in a great way. I highly recommend this book! — Quinn, age 9

I really liked the No-Good Nine. I liked all their names, (Liar, No-It-All, Brat, Hooligan, Rude, Cruel, Vainglorious, Goody-Two-Shoes, and don’t forget the Thief.) I also think the part with the walrus and Cruel was disgusting, but at the same time really funny. At the same point in the story, Goody stitches Cruel’s eye, and makes an eyepatch. Even though Goody and Cruel aren’t friends in the beginning of the story, I think they will become friends later. I also think the Brat’s password, ‘it’s me, stupid’ fit with the story when the Thief knocks Rooster Jack unconscious. — Julia, age 9

A Girl Called Bicycle - The first thing I said after finishing this book was that it should win an award because it was so good. The book is about a girl called Bicycle and she wants to become friends with a famous bicycle champion called Zbig. So she decides to cycle from Washington D.C. to San Francisco to meet him! On her journey she has adventures and meets lots of different characters, some of them very funny; these include a Kentucky Derby winning horse, a ghost, The cookie lady and a pie chef! I really enjoyed this book because it was very well written and the story was more complex than most of the other books I’ve read. — Meshkeen, age 9

In the book The Unforgettable Guinevere St. Clair by Amy Makechnie, Guinevere suddenly finds herself in the middle of a mystery soon after moving to a new town. By making new friends, Guinevere and her little sister Bitty adjust to their new life even though there is a murder to solve. This book is an exciting read, and I really liked it! — Tess, age 11

I Am Still Alive was a great book in general, it kept me reading long past the normal recommended reading time (as designated but the human race). This book is about the experience of a girl who is stranded in the Canadian wilderness, with only a few materials. This book would be good for people who like the idea of survival without technology, and adventure. Although the adventure is admittedly not with heroes and monsters, it was still enjoyable and a wonderfully written book with an amazing, mind-wrenching plot. — Grace, age 12

Whatshisface is a great book but it starts off slow and gets better. It is about a boy named Cooper and when he gets a phone it starts to malfunction. Then there’s a weird glare that starts taking the shape of a person who says he is a ghost who died in the time of William Shakespeare. The ghost claimed Shakespeare stole the play he wrote, Barnabus and Ursula. Will Cooper help the ghost and change history? I recommend this book! — Ben, age 8

This is a great book!  The Mortification of Fovea Munson is a very funny, and crazy, book.  One day Fovea Munson stumbles upon three disembodied heads that start talking to her out loud.  This story is full of humor and laughs, and is about helping one another and being your true self.  I am nine. I read this book and it is just my reading level. I highly recommend this book to young readers looking for a good read. — Quinn, age 9

Spy School Goes South is the 6th book in the Spy School series. I loved it and now I want to read the other books in the series. The book is about a boy named Ben who is in a secret school for spies but his parents think he is in a science school. They are trying to defeat SPYDER, an evil organization. They go to Mexico but first they get lost, then they find SPYDER’s base by accident. It is very exciting and if you like adventure books you will like it. — Will, age 7

I really enjoyed reading My Father’s Words! I loved it! There were sad parts though, like the father dying, but it ends happy. I don’t want to give away the whole story, but the main characters are the brother Finn, the sister Fiona, the father, the mother, and Luke. If you like to read books that have dogs in them, there is a part with dogs. The dogs are kind of the main characters. Also, there is Martha who takes care of the dogs. I would recommend this book to a friend who likes to read books about families and animals. So, read My Father’s Words! — Mia, age 8